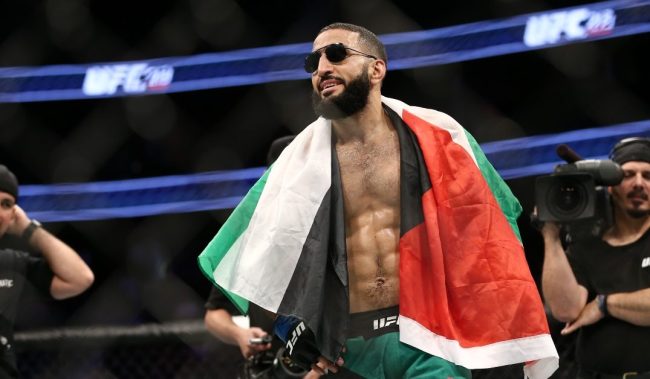 UFC 277 was a spectacular card as the evening was filled with spectacular fights. The main event between Amanda Nunes and Julianna Peña surprisingly went the distance but it still lived up to the hype. However, after The Lioness secured the title, she made some comments about the fight that rubbed Belal Muhammad the wrong way. Now, fans are all sorts of riled up about it.

According to MMA Junkie, Muhammad believes that Nunes is “getting too arrogant.” After she won the fight via decision, Amanda Nunes made some bold claims in the post-fight conference. Apparently, the UFC champion believes she could have finished the fight in the first round but wanted to go the distance to prove she’s the best. Belal Muhammad was having none of it.

To his credit, it is a rather odd thing for Amanda Nunes to say. Typically UFC fighters jump on any opportunity to finish their opponent. Additionally, she was on crutches after the brawl, so it’s not like she left without getting banged up either. Despite that, UFC fans became a bit riled up about Muhammad’s claims.

For once I agree with Belal. Amanda was still stunned saying that sht or what. She didnt follow up and finish her because she didnt want to be subbed.

Belal is Peña’s team mate. That tells you everything you need to know about where his comment is coming from

Belal should have no opinion on what it takes to get a finish. He has had more decisions than any fighter I’ve ever seen. 11 of his last 13 went to decision. More if you go further back.

As you can see, there is a wide mix of reactions to Belal Muhammad’s comments. Although he does make a fair point, many speculate whether or not he’s the right person to critique Amanda Nunes. Regardless, Nunes is the double-champ once again. We can expect her next fight to take place early in 2023.