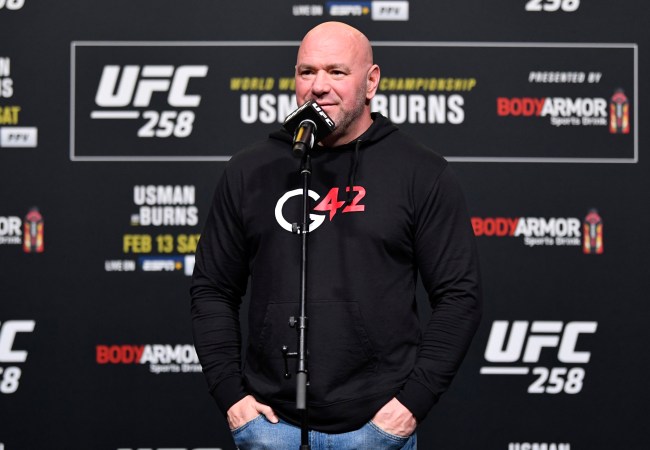 Last week Carano was fired by Lucasfilm after sharing a post that compared the current political climate in the United States to Nazi Germany which the company deemed as “abhorrent” and “unacceptable.”

“Obviously I am very disappointed in what she posted. To be honest I haven’t agreed with a lot of the things she has posted over the past year. This last post, essentially comparing being a Republican in America, or having a certain political view, to being a Jew in Nazi Germany during World War 2 is asinine.

“As a Jewish person, and as a human being, it just doesn’t sit well. And I wish she would have never posted that. And quite frankly I wish someone would have talked to her about her social media posts over the past year. Some of them not even political. Just in general, they felt off to me. I am sorry she has gone down this path.”

During the lead up to UFC 258, White showed support for Carano and went on to call Helwani a “douche” for trying to make the controversy “all about him.”

Several of Helwani’s ESPN colleagues took to Twitter to defend him from White’s comments.

A number of @arielhelwani’s ESPN colleagues are defending him publicly. pic.twitter.com/batoeidLfk

If @ESPN is interested in journalism, it can ask some questions here of bully and corporate partner @danawhite. There is certainly a douche here. But it ain’t the journalist @arielhelwani. Pick a side, ESPN. Quiet is complicit. — Dan https://t.co/hPLzHI8v1K

ESPN, who has a significant business partnership with the UFC, has chosen to stay silent on the White-Helwani situation.

I reached out to ESPN to see if they had a statement about this, and ESPN declined to comment. https://t.co/WqAcTPr6Nj