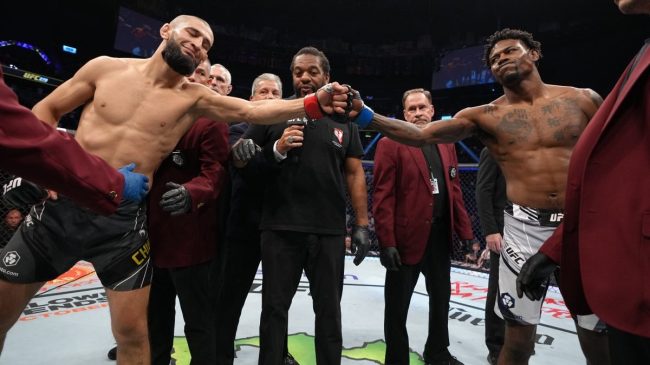 The UFC and its fan took a massive hit on Tuesday afternoon. No, nobody defected to Bellator. And no, nobody got injured. But the hit instead came in the form of a shock retirement from a fighter in the prime of his career.

Addressing the issue on his new podcast, 29-year-old welterweight Kevin Holland announced that he was stepping away from the sport of mixed martial arts.

Holland most recently dropped a 180-pound catchweight fight to rising star Khamzat Chimaev. But prior to that fight, which he took on just one day’s notice, Holland had won his last two bouts.

In fact, his first-round knockout of Tim Means on June 18 earned Holland a bonus for the performance of the night. But it sounds like a sizable payday for the fight against Chimaev made the decision a little easier.

“So I’m retired. I’m officially retired,” Holland said. “I’m retired from fighting. I had a good fight, (a) good payday, I had a good run. I see some of the people online [saying] ‘obviously he realizes he’ll never get the belt,’ and my little psychedelic trip, that means I was wrong, I can’t be wrong on a psychedelic trip. I’ve lost coming out to Young Boy. That was my last hope, never losing coming out to Young Boy. Times are rough for your boy.”

Because of the last-minute nature of the UFC 279 changes, Holland’s payday for the fight against Chimaev was more significant than usual.

“He put me in a very good spot in my life,” Holland said about Chimaev. “We love that guy. I’m actually thinking about getting a poster of that guy hung up in my bathroom.”

While he called it a retirement, it sure sounds like Holland isn’t completely shutting the door on a comeback.

“But I’m really, really happy on the green side,” he said. Unless something super-duper magical pops up, yeah, I’m pretty happy with the way things are.”

UFC fans are sad to see Holland go and already hoping that he makes a comeback.

It doesn’t matter how many times he says it, for some reason my brain just can’t process this retirement idea lol. Hope something magical does pop up, preferably magic with no wrestling.

Out of all the retirements I've seen with fighters. This one cuts the deepest. Best of luck to you in your next adventures @Trailblaze2top

Man, this one hurts! Big Mouth quickly became one of my favourite fighters, it’s a shame he’s retiring so young but good on him getting the bag so fast!💰💰💰 pic.twitter.com/deddLZUOIT

Though some were happy to see Holland get out with health still largely intact.

Love to see a fighter leave on their own terms.

He’s only 29 and he had an great UFC career for how long it lasted. https://t.co/3d1cYRPA3z

Holland’s retirement marks the loss of one of the company’s biggest personalities. Though it would surprise no one to see him fighting again some day.