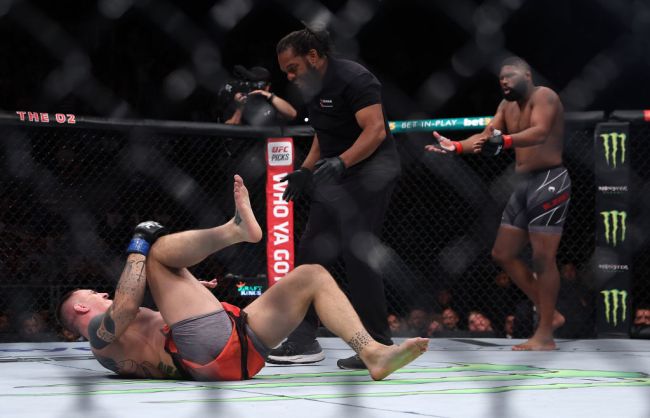 The main card of UFC Fight Night: Blaydes vs Aspinall showed so much promise early on for the British fans in attendance. Molly McCann scored a 1st round finish over Hannah Goldy. Paddy Pimblett earned a 2nd round submission over Jordan Leavitt. They were even treated to an emphatic 1st round finish from Nikita Krylov.

The main event had a chance to really the evening something special for those fans. Then it ended in bizarre fashion. Curtis Blaydes and Tom Aspinall were exchanging strikes right from the opening bell.

After landing a leg kick in an early exchange, Aspinall went to step back and fell to the floor as he was hit with a couple of strikes. Aspinall grabbed his knee after hitting the floor and the fight was waved off, giving Blaydes the win by injury after less than a minute.

Tom Aspinall lands a leg kick then falls to the ground in pain, ending the #UFCLondon main event.

It’s just a disappointing outcome for everybody involved. Tom Aspinall lost out on the chance to score another main event win in his home country and potentially set himself up for a title shot against Frnacis Ngannou.

Curtis Blaydes lost out on a chance to put himself back into the title conversation with a more emphatic win. Now he finds himself in a weird spot in the UFC’s heavyweight division as he has lost twice to Francis Ngannou, once to Derrick Lewis, and beaten most of the rest of the top 10.

With Ciryl Gane and Tai Tuivasa currently set to face off against each other in September, the only interesting fight available to Blaydes right now is Stipe Miocic, who hasn’t seemed particularly interest in the fight, or Jon Jones, who has yet to actually fight at heavyweight and hasn’t fought at all in over 2 years.

Hopefully Aspinall can return at full strength before too long and fans can get another chance to enjoy what should have been an intriguing fight between two of the UFC’s best heavyweights some time in 2023.