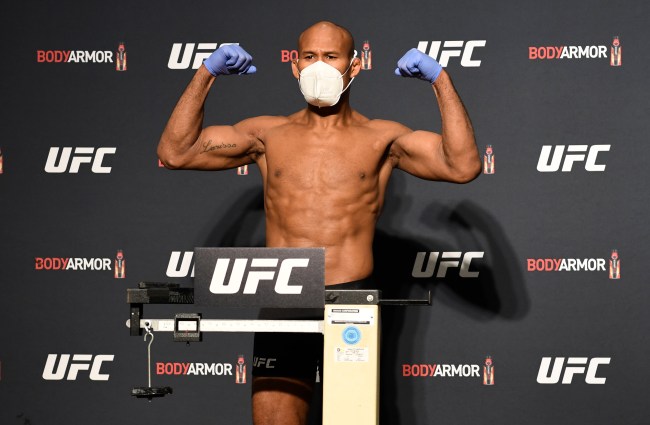 The UFC 249 fight between Jacare Souza and Uriah Hall scheduled for May 9th has been called off after Souza tested positive for coronavirus.

Ronaldo “J’acare” Souza, who was scheduled to fight Uriah Hall at UFC 249 on Saturday, has tested positive for coronavirus.

While Souza will not fight, the UFC 249 card will go on as planned, Hunter Campbell, excecutive vice president and chief business officer of UFC told ESPN’s Stephen A. Smith on Friday.

Souza arrived in Jacksonville, Florida, on Wednesday and informed UFC officials that a family member had tested positive. Souza was asymptomatic but was isolated and tested, and Friday the test came back positive.

As of now the UFC 249 fight card will still go on without Souza.

Just spoke with a FL state commission official who said he is still very comfortable with UFC 249 proceeding despite the positive test. Said Jacare disclosed a recent contact with an infected relative and was isolated upon his arrival until results came back. "The system worked."

The other 23 fighters on the UFC 249 card tested negative for COVID-19, per sources.

Jacare has left the hotel, per sources.

During today’s weigh-ins Souza was the only fighter to wear gloves and practiced social distancing during faceoffs.

Jacare was the only one who wore gloves, that I recall, to the weigh-ins today. And his faceoff with Hall had the most gap between them. pic.twitter.com/tjQVBL6L3R

In addition, COVID-19 tests for Souza’s two cornermen were also flagged as positive. UFC’s medical team examined Souza and his two cornermen and found them to be currently asymptomatic, or not exhibiting the common symptoms of COVID-19. As per UFC’s health and safety protocols, all three men have left the host hotel and will be self-isolating off premises, where UFC’s medical team will monitor their conditions remotely and will provide assistance with any necessary treatment.

From their arrival earlier in the week until their departure today, Souza and his cornermen followed UFC health and safety protocols, including practicing social distancing, wearing personnel protective equipment, and self-isolating whenever possible.

There have been no other positive COVID-19 tests reported from the remaining athletes participating in UFC 249.