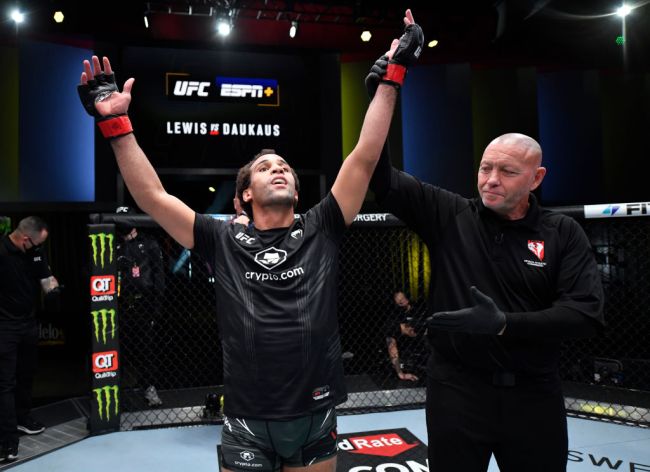 Any time a UFC fighter has a fight coming up, they’ll tell everybody who will listen that they’re going to win and that they plan to do it with ease. However, there are some fighters who take their confidence a step further. Jordan Leavitt is one such fighter.

He hadn’t broadcasted that confidence to the world, but one eagle-eyed twitter user noticed it today. While scrolling through BetMMAtips, a website where individuals who bet on MMA can track their bets, MMA gambler PigLordMMA noticed that Jordan Leavitt had placed a bet on himself on Saturday night’s UFC card.

Wait a minute, what? pic.twitter.com/C0ugntJ8IB

Leavitt not only placed the bet on himself, but also backed the bet up with good reasoning.

Jordan Leavitt betting on himself and mentioning implied odds while capping himself at 60% is actually pretty dope and refreshing.

No "There's no way I lose this fight" like we hear from everybody else, just the ole "You have a 15% edge betting me this week". Dope. #UFCVegas51 https://t.co/qKGzJja2FY pic.twitter.com/wtHJ9ARfgh

Based off of Leavitt’s assessment, he should be capped as a -150 favorite if he wins the fight 60% of the time. He is currently a +110 underdog against Trey Ogden, which makes him a pretty great value if he should actually be -150.

It is currently unclear just how much he bet on himself as unit sizes vary from gambler to gambler.

While this is a move that shows Leavitt has plenty of confidence in himself, this hasn’t always been a move that has worked out for UFC fighters.

Last year, Justin Jaynes bet his whole paycheck on himself ($25000) at +140. He lost a split decision to Charles Rosa and then was cut by the UFC.

James Vick bet on himself in a UFC main event against Justin Gaethje. Gaethje knocked him out in just under a minute and a half.

They say there are no fairytale endings in mixed martial arts, but maybe Jordan Leavitt can create one for himself on Saturday’s UFC card.