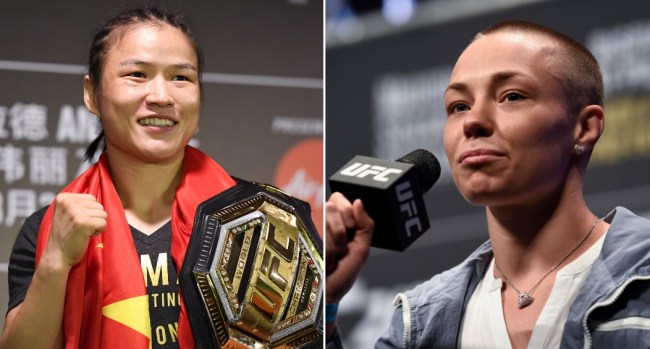 Lithuanian-American UFC fighter Rose Namajunas is catching some heat over some comments she made before her UFC 261 fight Zhang Weili.

While speaking with Lithuanian National Radio and Television, Namajunas said she had a bit more motivation to beat Weili because Namajunas feels she represents communist China.

It’s nothing personal against her, but that’s a huge motivating factor of why I fight, and I fight for freedom,” s who’s looking to win the 115-pound title for a second time. “I’ve got the Christ consciousness, I’ve got Lithuanian blood, and I’ve got the American dream. All of those things I’m taking with me into the fight.”

The animosity and things like that, those can be very motivating factors in short moments. But in all actuality going into the fight, maybe there was certain rivalries and things like that, but I always kept myself in control,” . “I never really hated the person – and I don’t hate Weili or anything like that. There’s nothing … but I do feel as though I have a lot to fight for in this fight and what she represents.

“I was just kind of reminding myself of my background and everywhere that I come from and my family and everything like that, and I kind of wanted to educate my training partner on the Lithuanian struggle and just the history of it all, so we watched (2012 documentary film) ‘The Other Dream Team’ just to kind of get an overall sentiment of what we fight for,” “After watching that, it was just a huge reminder of like, yeah, it’s better dead than red, you know? And I don’t think it’s any coincidence that Weili is red. That’s what she represents.”

Namajunas’ comments immediately received backlash from MMA fans who felt she was being racist towards Weili in a time when anti-Asian sentiments at are an all-time high.

Ah yes, because Weili Zhang stands for and agrees with everything the Chinese government has done, plans to do and all its policies – past and present 🤦🏾‍♂️ https://t.co/2bBT79d8uF

I’m so disappointed in you @rosenamajunas

Being Chinese doesn’t make you CCP or a communist. Don’t blame the faults of the country’s government on their people.

Such a careless interview when anti-Asian sentiments are at an all time high in the US. https://t.co/njvroONV2C

So Rose drums up Communism's past as a mentality she's approaching to the fight against Weili, saying that she reps that.

Whatever works, that's fine, but important to note that A LOT of anti-Asian sentiment this past year is tied to anti-China/Communism speech #UFC261 https://t.co/zFKw83hBMT

Generalising a fighter with her whole country? Yikes https://t.co/YisFt1G8d1