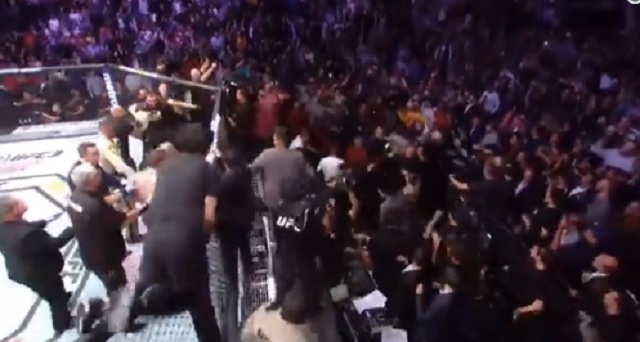 In his Instagram post calling out Tukhugov, Conor used the troubled history between Dagestan (Khabib’s hometown) and Chechnya
(Zubaira’s hometown) for his trash talk.

Tukhugov spoke with MMA Fighting last week and said he wanted fight McGregor “outside of the cage” for crossing the line with his trash talk.

“If you are a man – if you’re a Chechen man, American man, Ireland man – you tell him [to his face], ‘No put Instagram. No message.’

“10,000 kilometers, in Ireland or America, put up Instagram, message, shit? This is no problem. After fight with Lobov, okay, tell me to my face.

“I want to fight outside. No cage, outside, after Lobov. I tell him. And after my fight, I show him.”

During last night’s wild UFC 229 post-fight brawl, Tukhugov was one of three men who jumped in the cage to confront Conor McGregor.

An alternate view of the brawl shows McGregor throwing a punch at one of Khabib’s cornermen immediately after Nurmagedov jumped outside of the cage.

Watch the top of the cage, you’ll see Connor hit one of Khabibs guys out of nowhere, seems like that’s why the other guys jumped in the cage and jumped him. Doesn’t seem completely innocent from this angle 👀 #UFC229 pic.twitter.com/xNIZyHzm0Z

Tukhugov later went on social media to brag about slapping McGregor for his trash talk according to a translation from MMA journalist Karim Zidan.

I slapped him as promised. I promised to make him answer for his words and I did.”

UFC fighter Zubaira Tukhugov is bragging on social media about attacking Conor McGregor at #UFC229: “I slapped him as promised. I promised to make him answer for his words and I did." pic.twitter.com/Iy2QYlUmEt

It appears that Tukhugov’s UFC days are over because of his actions during the brawl.

Dana White says if any of the three men arrested after the post-main event brawl were UFC fighters, they will not be fighting again in the organization #UFC229