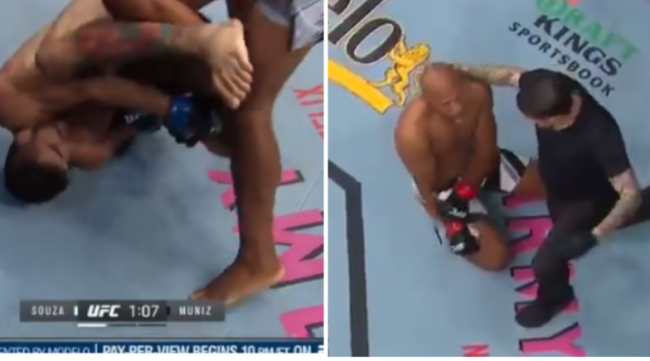 Ronaldo “Jacare” Souza is one of the greatest grapplers in UFC history but unfortunately, he was on the wrong end of a nasty submission at UFC 262.

On Saturday night, Jacare faced Andre Muniz and lost the fight in the first round after Muniz was able to submit him by trapping his arm during a takedown attempt. In the video, you can see Jacare’s arm instantly pop out of place.

WOW 🤯@andremunizufc is able to earn a submission against Jacare at #UFC262 pic.twitter.com/45NMJCn4TF

HE BROKE HIS ARM 😱😱@AndreMunizUFC submits Jacare Souza in Round 1!! #UFC262 pic.twitter.com/dH6tn41xhZ

It’s stunning to see Jacare lose via submission considering his storied past.

Jacare was only subbed once, by Roger Gracie ar ADCC 2005. Jacare had his left arm broken by Roger a year before at the IBJJF Worlds and still won. Incredible stuff by Muniz. https://t.co/z1jL8mjH2n