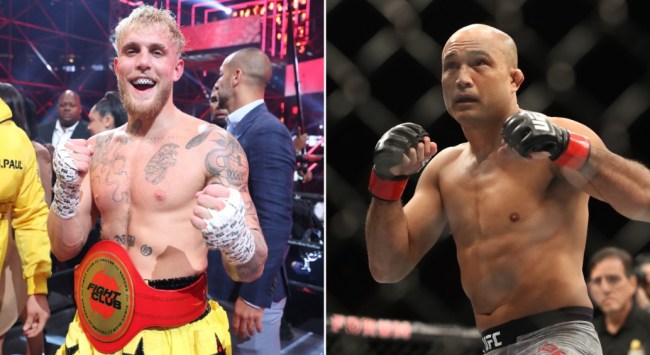 Jake Paul already has several potential opponents lined up ready to take him on.

On Saturday night, Paul made quick work of Ben Askren after knocking out the former UFC fighter in the first round of their fight.

Hey @triller send me a contract and I will happily knock this fucker out in one round 💯 https://t.co/JSP5lNh9xh

BJ isn’t the only former UFC fighter to openly challenge Paul to a boxing match. Chris Leben, Dillon Danis, and Phil Baroni took to Twitter to offer up their services against Paul.

Seems we need to settle some scores with some boxers

it’s on 100% send me the contract let’s do this i’m gonna put this cunt out cold ⚔️ pic.twitter.com/qgWj0A55gu

🙋🏿🙏🏿 I was boxing dorks just like you in 1999 tough man. Pass the torch or try and take it. Makes about as much sense as @Benaskren I always have a great body come in shape & hit hard. I’ll fight back https://t.co/RAQxgDZsvN pic.twitter.com/xYOH37PNO3

Paul hasn’t indicated who he wants to fight next but he definitely has several options on the table.