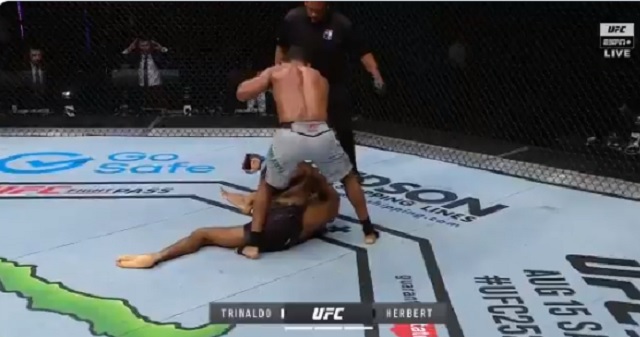 MMA fans are not pleased with veteran referee Herb Dean.

During tonight’s UFC Fight Island card, Dean had a momentarily lapse in judgement when he didn’t stop the fight despite the fact that Francisco Trinaldo had clearly knocked out Jai Herbert.

In the video, you can see Trinaldo hesitates and waits for Dean to call the fight before punching a downed Herbert a few more times so that the ref could finally step in.

Dean was immediately confronted by a disgusted UFC announcer Dan Hardy at cageside.

Wow, Dan Hardy going off on Herb Dean "I do my job, now you do yours!"

MMA fans went on to blast Dean on Twitter.

What was the point of those extra punches? You could tell Trinaldo didn’t want to throw those but was forced to. Unnecessary. https://t.co/qGZUJlbeif

Herb dean wants to see someone die in the octagon

Wtf…. herb dean has been doing this more often lately.. wth is going on with him? It’s like he wants someone to get hurt https://t.co/SxP7rLH0Vz

Herb Dean is awful. Guy needs removed as a ref in UFC. Just like Yamasaki and Mazzagatti.