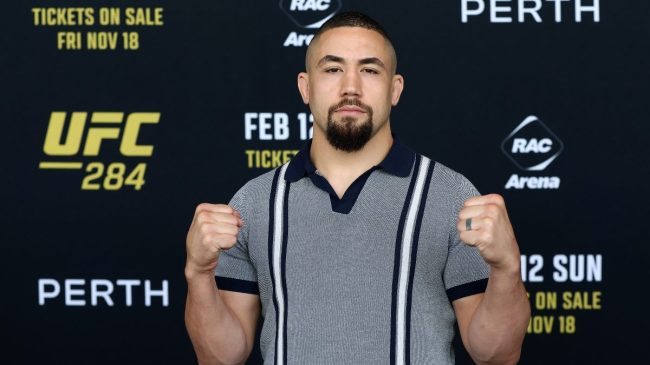 Alex Pereira is the new Middleweight champion after securing a TKO victory over Israel Adesanya. That makes him the new king of the hill and everyone in the weight division is looking to hunt him down. Now, UFC star Robert Whittaker makes a bold claim regarding the new champ.

According to MMA Junkie, Whittaker “is confident he can topple the ‘giant’ Alex Pereira.” I mean, why wouldn’t he? He is in the UFC after all. Regardless, Robert Whittaker makes the claim that “I can say that I think Pereira is a better matchup for me than Israel just because of the way he stands and the way he likes to push forward.”

Robert Whittaker is confident he can topple the “giant” Alex Pereira. 😅

Whittaker very well could be correct. He clearly struggled matching up against Israel Adesanya, as their UFC bouts have been extremely one-sided in the Stylebender’s favor. For that reason, Robert Whittaker might be thanking the stars that Alex Pereira holds the belt now.

Additionally, the UFC veteran can’t believe the size of Pereira, per MMA Junkie. Despite the size mismatch, Whittaker still believes he could take down the Middleweight champion. “Israel’s pretty big. He looks tall and lanky, but he’s actually a big dude, and then you see Pereira up against him and just his facial features are bigger. His feet and hands and forearms are massive. Who let this guy in? But still, I think I can take him.”

We’ll see if Whittaker gets his wish. As of now, rumors are that Alex Pereira and Israel Adesanya will have an immediate rematch. If not, then The Reaper could certainly take a shot at the belt.