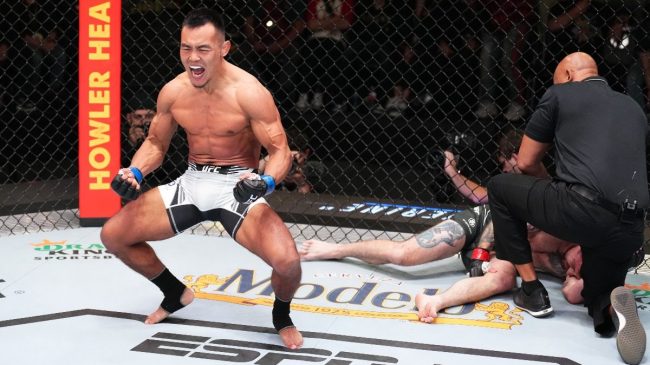 The last UFC Fight Night was a solid card through and through. However, it sounds like we may have a controversy on our hands. Shayilan Nuerdanbieke’s victory over Darrick Minner is under investigation, which could mean we’re dealing with a possible scandal.

According to ESPN MMA, there was some “suspicious wagering” going on in the bout between Nuerdanbieke and Minner. So much so, that the bout is officially being investigated by “a U.S.-based betting integrity firm.”

🚨| Shayilan Nuerdanbieke’s win over Darrick Minner last night is being investigated by a U.S.-based betting integrity firm after several sportsbooks in multiple states reported suspicious wagering on the featherweight bout.

The fight ended abruptly in the first round after Darrick Minner suffered a leg injury early on. Shayilan Nuerdanbieke jumped on him immediately and achieved the TKO/KO victory in just over a minute. Apparently, betting lines were changing due to an influx of bets for Nuerdanbieke to win the UFC bout, per Aaron Bronsteter.

Some crazy line movement in the Shayilan Nuerdanbieke vs. Darrick Minner fight over the last 90 minutes.

It’s unclear exactly what prompted the sudden mass amounts of bets on Shayilan Nuerdanbieke. Some believe Darrick Minner may have lost on purpose while others think his trainer might have leaked injury information before the fight. Either way, the UFC is looking into the possible scandal.

In the meantime, Granby Roll shares the ending of the bout at UFC Fight Night.

According to David Payne, the UFC left an official statement about the situation at hand.

For now, the fight is under investigation which means more information should come to light in the coming days. We’ll see how it plays out, as this could be a bad look for Shayilan Nuerdanbieke or Darrick Minner.