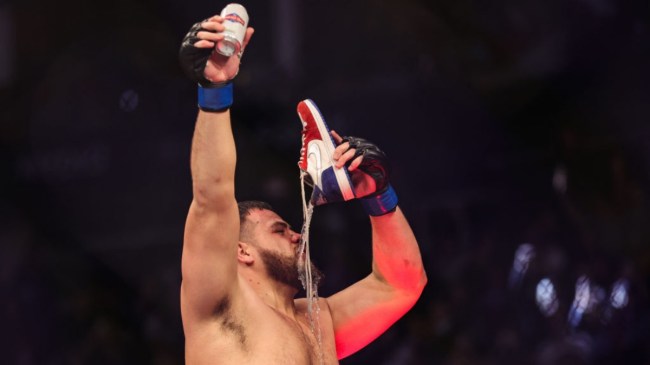 Tai Tuivasa has a chance to earn himself a shot at the UFC Heavyweight title this weekend when he takes on Ciryl Gane in the main event of Saturday’s UFC Fight Night.

However, that isn’t the only big fight he has been talking about lately. Tuivasa has also recently brought up his desire to fight former UFC Light Heavyweight Champion Jon Jones.

Tuivasa spoke to TMZ about his upcoming fight with Gane and a potential matchup against Jones and revealed that he may be just a bit too excited about both fights.

Tuivasa is currently in the midst of the best run of his UFC career. He is riding a 5-fight win streak ahead of his fight with Gane and has finished all 5 of those wins with strikes. Most recently, Tuivasa knocked out Derrick Lewis with an elbow back in February.

Meanwhile, Gane is coming off of the first loss of his career. That loss came by unanimous decision in a UFC title unification bout against Francis Ngannou. Before that loss, Gane had won his first 7 fights in the organization.

If Tuivasa can defeat Gane on Saturday, he’ll have plenty to be excited about. A win would either set him up for a title shot whenever Ngannou is recovered from his knee injury or for another high-profile opponent, like Jon Jones if he ever actually makes his heavyweight debut.

Tuivasa could have even more reason than usual to celebrate with a “shoey” if he can get the job done this weekend.