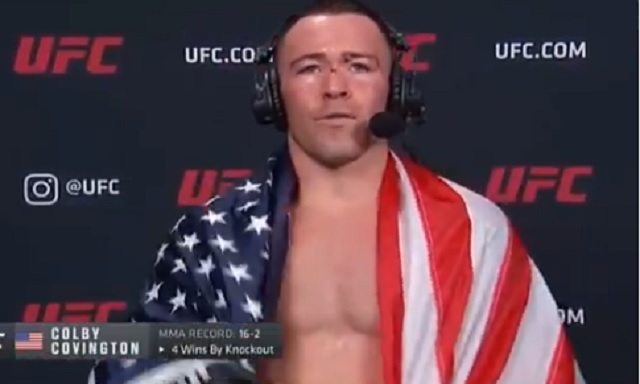 Colby Covington is officially back and he’s talking trash.

During the main event at UFC Vegas 12, Covington dominated his fight against Tyron Woodley which ended when Woodley tapped out after appearing to injure a rib.

Covington wins via TKO in the fifth. Looks like Woodley hurt a rib. He tapped. He’s lying on the mat and isn’t moving.

"I want my belt back! Where's my f—kin' belt? Where you at, Usman? Where you at, Street Judas?"@ColbyCovMMA wants the smoke 💨 #UFCVegas11 pic.twitter.com/k7dOSJLOhv

While speaking to Jon Anik after the fight, Covington wanted to thank first responders and blasted “woke athletes” like the “spineless coward” LeBron James.

Covington went on to call out Jorge Masvidal and Kamaru Usman in a WWE-style promo before walking off.

Update: Colby got a call from President Trump to congratulate him for his win.