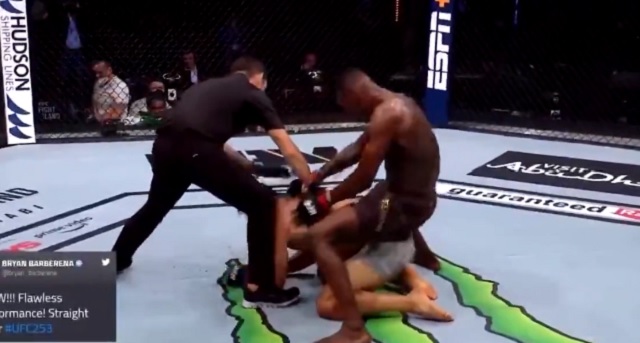 Israel Adesanya is taking his trash talk to another level.

After the ref called the fight, Adesanya disrespectfully humped Costa before breaking out in a victory dance.

Adesanya beat this man and then humped him 😂😂😂😂. #UFC253 pic.twitter.com/xOXKFTGZ9A

On Sunday. Adesanya admitted to humping Costa on purpose for talking trash and continued to mock his opponent on Twitter.

Imagine if I was taunting as much as Costa after all that shit he was talking…
The amount of shit I would cop from the internets hahaha.
I’m still in the air, I ain’t even started yet.
He had all the preflight memes.
I’m gonna go in on his ass…oh wait 😂😂😂

This is mine now. pic.twitter.com/Xzdp99Owd0

I went All In!! #rawdog https://t.co/ktXQEtqA1y