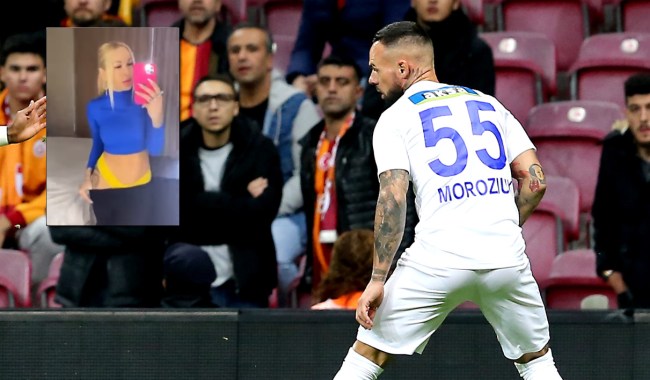 Irina Moroziuk, the wife of Ukrainian international soccer player Mykola Moroziuk, is in hot water and facing up to three years in prison for singing her country’s national anthem while showing her underwear.

Yes, this is a real thing that is happening in the year 2020.

Let me reiterate, Irina Moroziuk could be going to jail for “abuse of state symbols” after she sang Ukraine’s national anthem with her pants half pulled down exposing her yellow underpants, according to RT.com.

Ukrainian lawyer Yuriy Yurchenko says Moroziuk could face up to THREE YEARS in prison for her misdeed.

“According to Article 338 of the Criminal Code of Ukraine, abuse of state symbols is punishable by a fine of up to 50 tax-free minimum incomes, or arrest for up to 6 months or arrest for up to 3 years,” Yurchenko told Ukrainian news outlet Champion.

Irina Moroziuk shared the controversial post on February 1, sending her social media followers into a frenzy.

The video, which has been circulating online, shows Moroziuk wearing a tight-fitting blue top and low-sitting baggy trousers which exposed her yellow underwear – revealing a color scheme which matched that of the Ukrainian flag.

Moroziuk has a strong following on social media with over 55,000 followers on Instagram – a platform where the blonde beauty regularly shows a lot of skin wearing a wide variety of lingerie, bikinis and sometimes, less.

So far Moroziuk reportedly hasn’t been charged, but the mere fact that her doing such a thing is making news in the Ukraine in this day and age is remarkable.

Check out her “offensive” video as well as a couple of photos from her Instagram account below and see what you think.