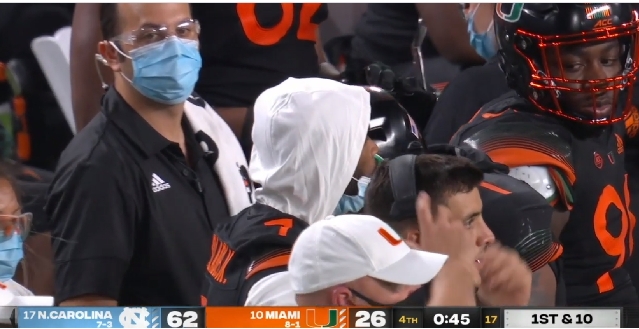 The University of Miami got absolutely embarrassed by North Carolina and the team is trying its best to prevent fans from berating them on social media but it’s not going too well.

On Saturday, UM gave up 542 rushing yards and 62 points to North Carolina in one of the biggest lopsided beat downs in school history.

UNC has just set the all-time rushing record by a UM opponent with 542 ground yards.

After the game, UM turned off all comments on social media because fans were so angry with the team.

social media guy turning off replies is the only Cane that stopped anything today https://t.co/FOVuGhWvcI

Imagine getting blown out so bad you turn off replies as a D1 football team😭 https://t.co/YAgcciai8o

Wow. @CanesFootball is salty. Closed off comments on their posts. https://t.co/rZA0hyChg9

You KNOW a loss is bad when they disable comments on the tweet announcing the score… #Canes #CanesFootball #TheU https://t.co/6FZ9qs2oF6

This account getting crucified more for turning off comments than the actual game 🤣 https://t.co/xznmq4G6T1