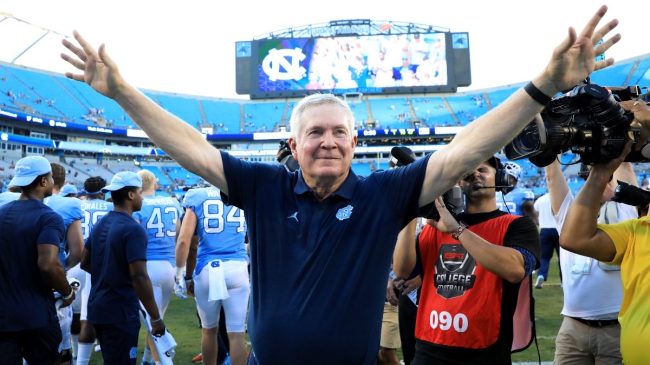 The North Carolina Tar Heels had a wild matchup against the App State Mountaineers in Week 1 of the college football season. Although the game was electric, the UNC locker room was hyped up after the big win.

So much so, that we saw head coach Mack Brown dancing once again. Additionally, he delivered one of the coolest lines ever and it needs to be put on a t-shirt.

The Antonio Brown dance is so easy even Mack Brown can do it. That’s the celebration dance he displayed in the UNC locker room. Brown isn’t shy to party with his team, especially after they win a nail-biter.

It’s awesome seeing the veteran head coach get down, but his line absolutely should be sold on t-shirts.

The UNC head coach held his promise to dance with his players if they defeated App State. In one of the most bizarre college football games you’ll ever see, Mack Brown and his team deserve some post-game fun.

However, this line he delivers might be the best we’ve ever heard. According to The Athletic, Brown claims, “Get hip and get some drip.”

Mack Brown told his Tar Heel team that if they go to Boone, North Carolina and beat App State as underdogs then he'll dance in the locker room.

After a thrilling 63-61 win, he lived up to that promise.

UNC football fans without a doubt are going to be saying this all year. Maybe even for the rest of their lives, who knows? I can see it now.

Mack Brown doing the Antonio Brown Dance with this quote right above it. Maybe get some shades on his face too. That’s something I’d easily spend $20 on.