The Undertaker Told Some Must-Hear Stories In A Very Rare Out-Of-Character, Half-Hour Interview 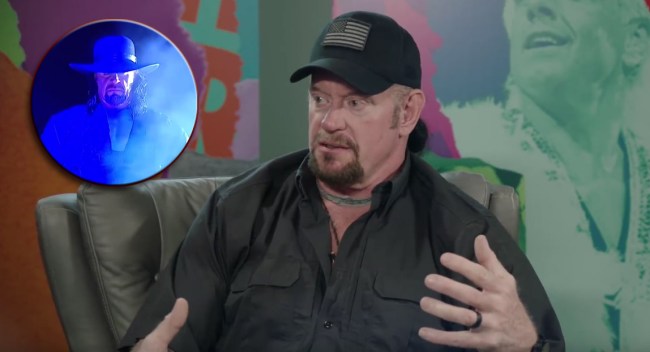 WWE legend The Undertaker, real name Mark Calaway, doesn’t give many interviews. Like, ever. Especially interviews where is out-of-character. Which makes this recent half-hour interview where he told some great stories about his life and 34-year career in wrestling to Pastor Ed Young extremely special.

One of the topics Calaway and Young discussed were today’s wrestlers and how they go about their business.

“The athletes today, they’re off the chart. It’s just ridiculous how athletically talented the men and women are, for that matter. But they rely… see, wrestling and sports entertainment, it’s not about the moves — it really isn’t — it’s being able to evoke emotion in one facet or another,” he began to explain.

“You have to either make people love you, or you have to make them hate you. Either way, and it doesn’t matter really which one,” Calaway continued. “Certain people like to be hated and other people like to be loved. But if you can’t bring that emotion out of your audience, you’re not going to have them for long.

“A lot of times what happens with these young guys is they’re so athletic, they’re so gifted, they’ll do some kind of double crazy back flip off the top rope and land on somebody on the floor and then that’s what the audience takes away from it: ‘this guy does crazy stuff.’ Well, you can only see that so many times before you’re like ‘I’ve seen that. I need something new,'” he explained. “And that’s the position they sometimes back themselves into. They have to keep upping the ante. And when you up the ante like that, then you increase your potential for injuries — catastrophic injuries at that — so characters, guys like The Rock, Cena, Flair, all those guys like that, they had the ability to either make you love them or make you hate them.”

Later in the interview, Calaway was asked what it’s like being such a publicly-recognizable figure, especially when he travels, which is quite often.

“Yeah, it’s kind of hard to hide. It really is. You know and the sleeves (tattoos). Even if they’re not wrestling fans it doesn’t take too many removals to find somebody who that person knows who is a wrestling fan,” he said with a chuckle. “So normally, your size it’s like, ‘Wow that’s a big dude, I wonder if he plays football… oh wait a minute… that’s the Grave Digger.'”

“So for years there, like I said, I kind of lived the character so it was ‘this guy’ everywhere, right?” he said pointing to a picture of The Undertaker. “It was like if they came up to me it would be different, but I tried to give them that aura, like, ‘don’t mess with him because he may drop you where you stand,’ right?”

Now, in the age of the selfie and with knowledge that wrestling is an act, people are less fearful.

“I try to be as accommodating as I can unless my kids are with me. I try to be as polite as I can,” he said. “I don’t want my kids’ pictures taken. I don’t want them on social media… really protective of that. I say, ‘hey my family is with me, normally I would but I can’t take pictures because it causes… you know.’ And most people understand that and respect it.”

And that’s the the tip of the iceberg in this lengthy, very rare, very interesting conversation with one of professional wrestling’s all time greats. Check the entire interview out below.