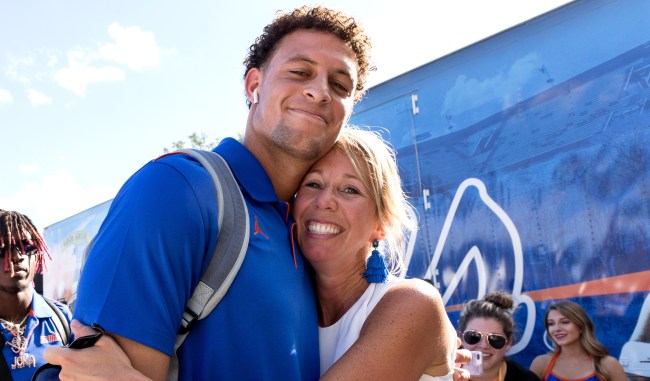 Yep, you read that right. Gators head coach Dan Mullen’s wife greets all of the Florida players with hugs and kisses when they step off the bus.

According to Total Pro Sports, this is a tradition that goes back awhile.

Mullens wife is DEFINITELY getting piped by a few players lmaooooo pic.twitter.com/eJqj7SDzPA

“At first maybe when I came in they said, ‘wow, who is that blond thats around and is always hugging me,'” Megan Mullen told Rivals.com. “Now they come up to me and hug me and talk to me before I get to them.”

Gators wide receiver Tyrie Cleveland said about Megan Mullen, “The way she shows love to us it’s a cool thing to have. It’s good to have a lady like that, sweet and kind.”

“She is like the co-head coach when it comes to being around the players,” said Dan Mullen about his wife. “You know pick them up and she is always positive, always has a smile on her face. But thats who she is. Not just around the players but she does that for me, she always puts a smile on my face.”

It is definitely true and definitely WEIRD!!!! One thing to hug them, entirely different when you are in their face kissing like that!!

I will be having nightmares about this. https://t.co/rGtgwspXYD

Those poor kids. I doubt these young men want to kiss some strange older woman. And if the genders were reversed their would be outrage. This double standard is b.s. Nobody should be touching, let alone kissing others that aren’t asking you to.

Wait one damn minute. Do they WANT to be kissed? That's a trick question...how tf does she know? Her husband is their coach, which means he controls their play time, promotion and even scholarships. Would the hubs of a woman coach be allowed to do this bullsh•t? GTFOHWTBS!

This is weird AF. And inappropriate. Can you imagine if this was the women’s gymnastics coach’s husband kissing all the girls on the mouth!? WTF

So y'all just let this lady violate these players out of "tradition"? This is disgusting! https://t.co/ndpAhdEFaa

When you realized you gotta little tongue in that pregame kiss pic.twitter.com/7UgIFSzhuN