Urban Meyer Gave A Clear Answer About USC’s Opening, But Is It A Lie? 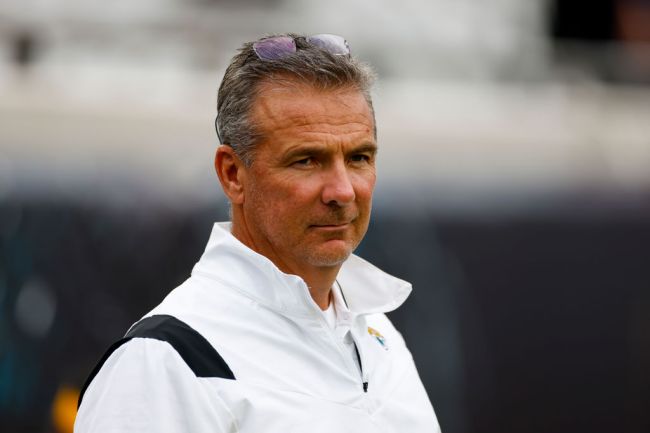 When Clay Helton was fired as the head coach of Southern California football on Monday, the rumor mill immediately went to work. College football message boards exploded and fans around the country began to speculate about who could fill USC’s absence.

In the interim, the school has named defensive backs coach Donte Williams as the Trojans’ head coach. The decision makes him USC’s first Black head football coach, but the appointment isn’t likely to last beyond the regular season. Barring a shocking move, Williams’ interim tag will not be removed.

Thus, it begs the question as to who will be the hire.

Some of the names involved include Penn State’s James Franklin, Cincinnati’s Luke Fickell, former Oklahoma coach Bob Stoops, and Urban Meyer. It seems doubtful that the Trojans would pursue Meyer, especially considering that he is only in his first year with the Jaguars.

However, there was reported mutual interest between USC and Meyer before Helton was not fired in the offseason.

Now that he is fired, could that mutual interest rekindle? Meyer and his wife say no.

Based on history, it’s hard to believe them.

Per Shelley Meyer, the family is comfortable in Jacksonville.

And when asked about his interest in returning to the collegiate level, Meyer gave a definitive response.

While that is all fine and dandy, Meyer’s body language certainly didn’t breed confidence.

And to make his response even harder to believe, he and his wife are notorious for lying. Or, at the very least, withholding the truth.

Urban first cited “health conditions” for his resignation at Florida, which is undeniably something to take seriously. But then he proceeded to take a TV job that required him to work odd hours and saw him fly all over the country.

And then he took the head coaching job at Ohio State, despite his health conditions that kept him from coaching the Gators. He would be fine with the Buckeyes, though.

While in Columbus, he fibbed about and covered up domestic abuse.

Not long thereafter, Urban resigned from Ohio State, once again citing his health, and said that he would never coach again…

Only for him to take the Jacksonville job during this past offseason. He claims that the recruiting aspect of college football was causing him stress and that the NFL will be better for his health.

All of this goes to say that Urban has a history of falsifying reality. So if he’s really not going to take the USC job, we won’t know until Athletic Director Mike Bohn hires someone that isn’t Urban Meyer.