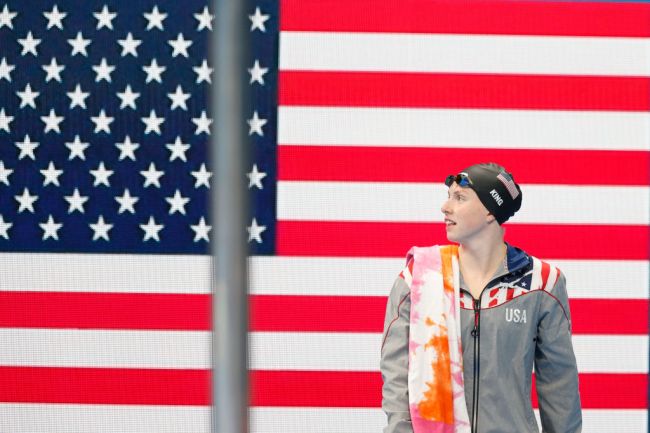 Lilly King thinks it’s time we all stop downplaying silver and bronze medals at the Olympics.

King took home silver in the women’s 200-meter breastroke in Tokyo alongside fellow American Annie Lazor who took home bronze. After the race, King took a direct shot at both the media and American public for not often celebrating silver and bronze medals like they do gold medals.

“Pardon my French, but the fact that we’re not able to celebrate silver and bronze is bull—t,” King said.

King won two gold medals during the 2016 Olympics in Rio and earned a bronze medal earlier this week in the 100-meter.

The winner of the gold medal in the 200-meter breastroke, Tatjana Schoenmaker of South Africa, broke the world record posting a time of 2:18.95. As soon as the time posted after the race, King, Lazor, and others immediately swam over to Schoenmaker to celebrate.

One of my favorite moments of the #Olympics. 🇿🇦’s Tatjana Schoenmaker wins gold in 100m breaststroke, realizes she also broke the world record and #USA’s Lilly King and Annie Lazor, who win silver and bronze, swim over to her lane to congratulate her pic.twitter.com/QzeqoJswam

As for King’s statement about silver and bronze medals not being celebrated, she’s not exactly wrong. I’m guilty of it, you’re guilty of it, us Americans like finishing first. While we tolerate second and third place finishes more than other nations, and maybe a little too much, most see the Olympics as gold medal or bust.

Whether you agree or disagree with King’s comments, I think you have to tip your cap to her for speaking her mind. She’s the one that’s spent hundreds of hours in a pool and she’s the one that’s going to cherish that silver medal, she can take a shot at the media whenever she wants.