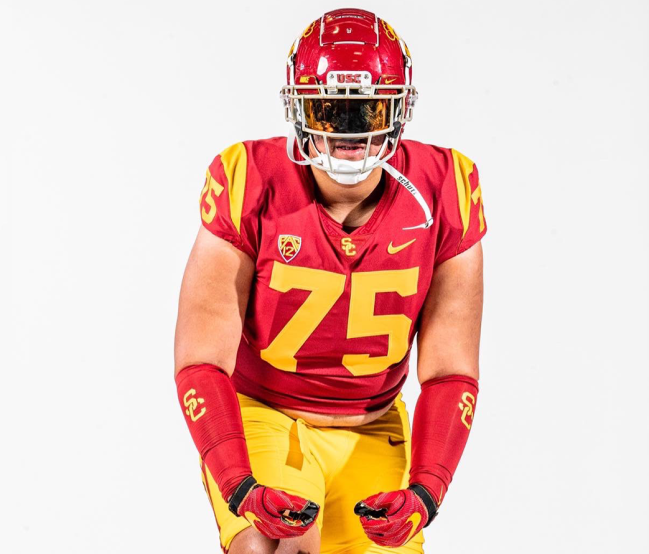 Class of 2023 recruit Amos Talalele flew significantly under the radar. The big offensive lineman was down to five Pac-12 schools but committed to play for USC on Monday. He has the potential to be a monster.

Talalele, who plays on both sides of the ball for Santa Clara High School, lines up as a defensive tackle, offensive guard and offensive tackle. He is a high three-star, low four-star prospect with a significant amount of upside.

No matter where he lines up, his opponents have a major problem trying to stop him from dominating.

On defense, Talalele is a force to be reckoned with. Once he gets his hands on an opposing offensive lineman, they are rarely able to stop him from causing chaos in the backfield. Hailing from the same high school as Vita Vea, the California-native could follow in his footsteps and dominate inside.

Another clip from the camp !!! pic.twitter.com/sAJpDRfoXQ

On offense, Talalele possesses a wide base and great extension. He has incredible flexibility and fancy feet for someone his size that allow him to keep up with faster edge rusher and is strong enough to keep them at bay.

Another 1v1 from yesterday 🖤 pic.twitter.com/akCwreHZoG

His tape is vicious. Talalele is a mauler.

Amos Talalele is remarkably nimble for someone who is as big as he is.

He recently went viral amongst the recruiting world after showing off his offseason work. During a video from what is presumably spring practice, he is absolutely MOVING through the bags, on the ladder and in the shuttle.

Talalele is staying on the West Coast and playing for head coach Lincoln Riley and the Trojans. His ceiling is much higher than his floor so Pac-12 defenses better look out!