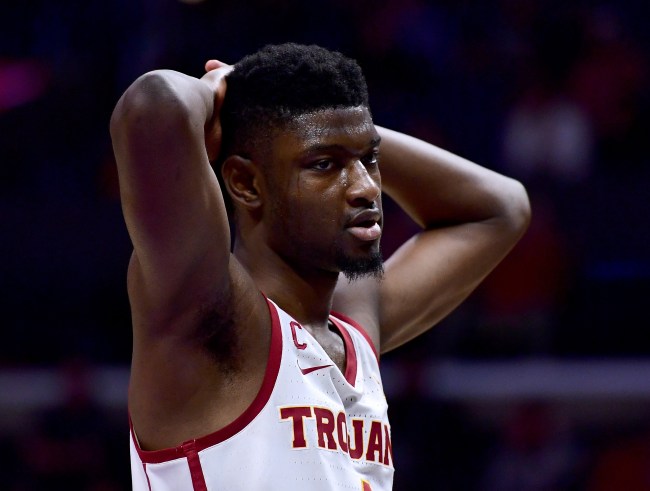 USC star junior Chimezie Metu threw the cheap shot of all cheap shots during Sunday night’s 89-71 win against Washington State. With 5:50 left in the first half and the Trojans leading 33-19, Metu closed out WSU’s Carter Skaggs three-point shot by delivering a fist to his nut sack, sending him to the floor writing in pain. The refs hit Metu with a flagrant 2 foul and he was ejected from the game.

I felt that in the pit of my stomach.

To add insult to injury, Skaggs told the Spokane Spokesman Review that as he was writing on the floor in pain, a USC assistant called him out for flopping.

“That’s something I’ve never had happen to me before. That kid took a full fist and really tried to take a swing at me. Then, the funny thing is, one of their assistant coaches looked up at me and said, ‘Why are you faking?’”

On top of the ejected, USC head coach Andy Enfield will sit his leading scorer for the first half of Thursday’s game at Cal. He also ordered Metu to pen a letter to Skaggs, WSU’s head coach Ernie Kent, and the WSU team apologizing for his actions. Maybe worst of all, the junior was forced to resign his captaincy of the team.

According to USC’s press release, Metu’s letter to WSU read, “… a lack of judgment for a split second led to an action that I immediately regretted and had no business committing in the first place. I understand there is no place in the game of basketball for such an unsportsmanlike action.”

Throwback to when Chris Paul was suspended for the ACC tournament quarterfinals in 2005 when he drilled N.C. State’s Julius Hodge in the marble bag.