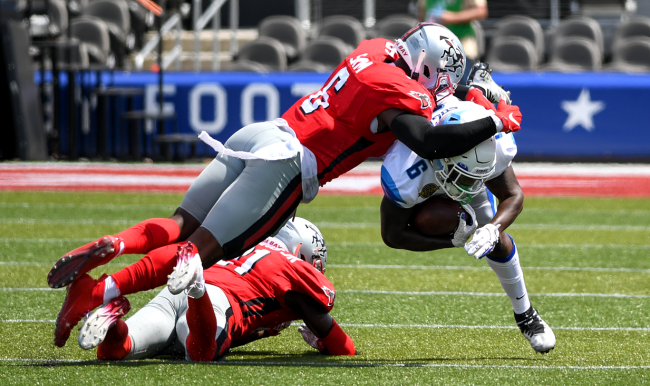 As everyone expected, the TV ratings for week 2 of the new USFL took a sharp decline compared to the fledgling league’s opening weekend.

In week 1, the USFL drew an average audience of more than 1.5 million viewers for the four games that were played in Birmingham.

According to Sports Business Journal, that number, while not good, was better than what the Alliance of American Football (AAF) suffered between weeks 1 and 2 in 2019 (69%).

It was not better than what the second incarnation of the XFL was able to draw in the same time period as that league only experienced a 34% drop in viewership from week 1 to week 2.

Interestingly, the USFL game that drew the highest viewership was the Saturday afternoon Pittsburgh Maulers and Philadelphia Stars game with 1.06 million viewers.

What makes that so unusual was the fact that at one point during the broadcast it appeared as if the stands at the game were almost empty.

Saturday night’s Birmingham Stallions (the hometown team) game vs. the Houston Gamblers looked a little better, but then it was back to empty seats on Sunday for the Breakers-Bandits game.

By comparison, in the original USFL’s inaugural season games averaged 25,031 fans with the Denver Gold leading the league with 41,736 in average attendance. The Boston Breakers finished in last that year with just 12,817 fans per game. In 1984, the USFL averaged 22,590 fans per game with the Jacksonville Bulls and Tampa Bay Bandits each average over 46,000. Then, in its final season, 1985, the average attendance at USFL games was 24,375, led by the Bandits, Bulls and New Jersey Generals all over the 40,000 mark.

On the plus side for the USFL, despite losing out to the NBA Playoffs, NASCAR and the PGA Tour over the weekend, the league did manage to draw more viewers than Sunday Night Baseball, the Formula 1 race, Saturday’s Rangers-Bruins game, and the Tottenham-Brentford soccer match.

Unfortunately, this coming weekend, with another four games on the schedule, the USFL will be competing with much of the same competition for viewers plus the final two days of the 2022 NFL Draft on Friday and Saturday.