We Can Confirm That The USWNT Postgame Celebrations Are Absolutely Lit 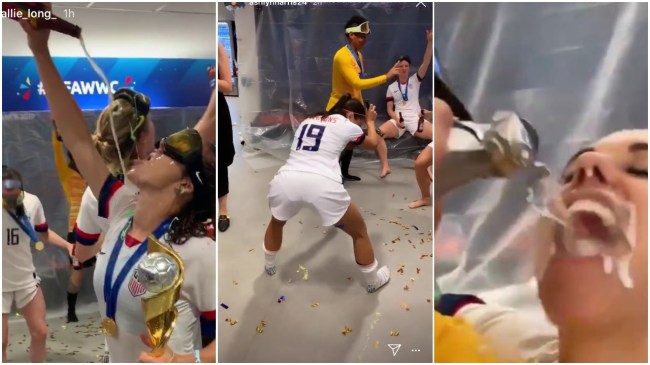 There are a handful of beers in this life that are far superior to the rest.

But of all the remarkably thirst-quenching, utterly-satisfying and soul-filling beers there are out there in the world, the just-won-the-biggest-title-in-my-respective-sport beer may trump them all.

Whether it be the Super Bowl, the NBA Finals, the American Corn Hole Championship (yes, that’s a real thing) or the Women’s World Cup, those postgame celebration beers are likely literally the tastiest in the entire history of the liquid itself.

Not only is your body free of the intense physical exhaustion it was just forced to endure, but you’ve literally reached the mountaintop of your given profession. Of all the people in the world who do what you do, you’re the best at it. And THAT is a feeling that not many of us get to experience, hence why the beer that washes down that taste of victory is unquestionably the sweetest in the world.

And when it comes to the United States Women’s National Team following their record-setting fourth World Cup victory, it appears that plenty of those legendary beers are being enjoyed in the postgame locker room celebrations.

While Ashlyn Harris — a backup goalkeeper who plays for the Orlando Pride — didn’t see a minute of playing time during the 2019 Women’s World Cup, she made sure to deservedly celebrate like she was a full-time starter.

And luckily for fans of the USWNT, she took to social media so the world could get a glimpse at how the greatest women’s soccer team to ever exist enjoyed the bliss of winning their fourth World Cup title.

Harris wasn’t the only one playing social media content creator, though, as Allie Long — a midfielder for Reign FC — posted whats likely the lasting image of the celebration, starting right back Kelley O’Hara waterfall chugging a Bud heavy. Iconic.