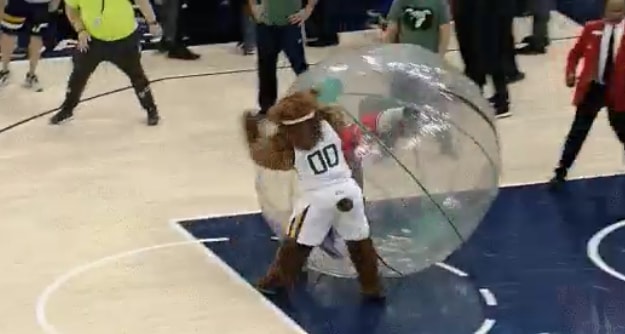 The Utah Jazz knotted up the series with the Los Angeles Clippers with a 105-98 win in Game 4. The Jazz defended their home court with the win and during a silly inflatable ball contest.

During a timeout, an adult Clippers fan was going up against a child Jazz fan in the inflatable ball race. Instead of beating the kid fair and square, the Clippers fan pushed the kid to the ground. The Clippers fan then raced down the court, but out of nowhere came Utah’s mascot, Jazz Bear. The mascot lowered his shoulder and obliterated the Clippers fan with a soul-crushing hit from behind.

Adult @LAClippers fan is a dick to kid in fun quarter-time race.@utahjazz mascot DEE-STROYS him.

.@LAClippers @utahjazz Oh wow. That fan looked in bad nick. Even the Jazz announcer asked "Is he OK?" pic.twitter.com/vx6srX5En9

However, is everything as it seems? In our absurdly litigious society would a franchise worth $910 million allow their team mascot to blindside check a fan? Wouldn’t the man in the bear suit be suspended or fired for attacking a fan? It has to be staged right? Or did United Airlines buy the Utah Jazz.