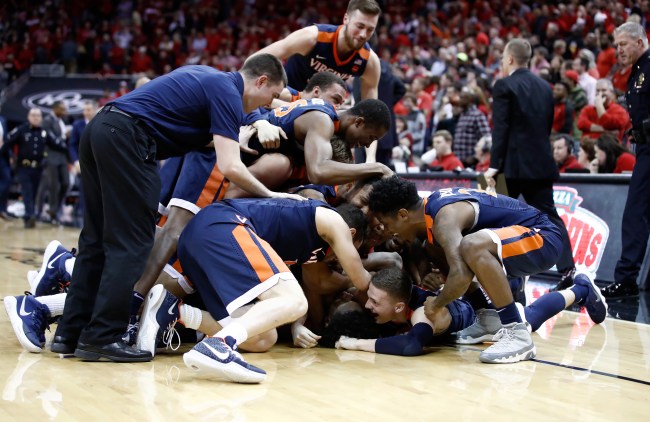 There are some games that will stick with the players, coaches, and everyone in attendance long after the season ends–for better or for worse. Last week’s 34-point Drexel comeback win that secured its place as the greatest comeback in college basketball history will be a game the Drexel players will tell their grandkids about. Delaware, not so much. I don’t remember what I did last weekend but I remember clearly Duke’s “Miracle Minute” against Maryland in 2001, when Jason Williams and the Blue Devils came back from 10 down with under a minute to go.

Everyone who was at the KFC Yum! Center in Louisville on Thursday will likely remember what transpired for a long, long time.

Top-ranked Virginia drilled a buzzer-beating three-pointer to pull out an improbably 67-66 over Louisville despite being down by 4 points with less than one second to go. The Cavaliers trailed by 2 points with .9 seconds to in the contest, and they didn’t even have the ball.

I’ll let this clip do the talking.

Louisville led by as many as 13 in the second half and held a nine-point lead with 3:47 to play, USA Today reports. Police and security staff had formed a border around the court anticipating the fans storming the court. That wouldn’t be necessary as a couple mind-boggling mistakes from Louisville and a banked three would allow UVA to escape enemy territory unscathed.

First, Louisville freshman Darius Perry committed an inconceivable foul of Ty Jerome on a three-point attempt with 0.9 seconds remaining (if he hadn’t fouled him, time would have expired after the shot was made). Jerome made two of three free throws, putting  UVA within two. Then, Louisville junior Deng Adel turned the ball over after being called for traveling along the baseline on the inbounds, allowing for a last second heave to De’Andre Hunter.