MADNESS IN OMAHA! Vanderbilt Viciously Bat-Flips Walk Off Wild Pitch After Coming One Out Away From College World Series Elimination 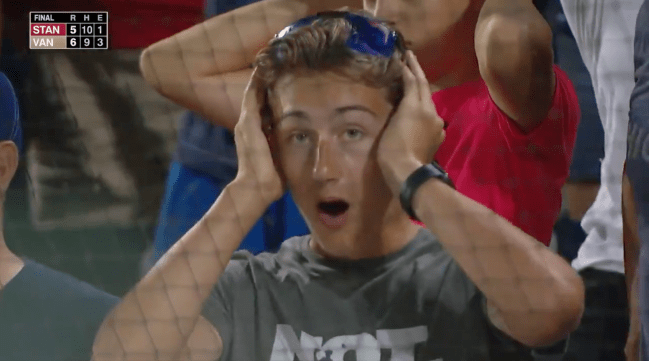 Vanderbilt baseball was the betting favorite to win the College World Series. Both of the Commodores’ Friday and Saturday starters are projected Top-10 MLB Draft picks and their confident offense can manufacture runs at any time. That was the case on Wednesday as the Vandy Boys narrowly avoided elimination.

After getting down to its final out, Vanderbilt defeated Stanford on a walk off wild pitch. Look at the fan at the 25-second mark. It was mind-blowing.

Now watch the replay. Before the winning run crossed the plate, infielder Carter Young — who was at the dish — threw his bat with unprecedented viciousness.

Still Playing
Still Reigning
The @VandyBoys Walk it off to play again in Omaha#CWS pic.twitter.com/mFyNT2sePP

Everything about the moment was unbelievable in the most literal sense of the world. Vandy fans exploded.

POV: You're a fan watching the #VandyBoys walk-off in Omaha.#CWS pic.twitter.com/zXG5cETgC8

Omaha is never boring and we saw that on Wednesday. Let’s look back at how the Commodores got here, because the journey is equally as wild.

Working to walk off.

They went undefeated in the Nashville Regional and swept East Carolina in the Super Regional.

Upon arrival at the College World Series, Kumar rocker got knocked around a little bit in game one on Saturday. Nevertheless, the offense provided him support and Vanderbilt walked off Arizona in the bottom of the 12th inning to advance 7-6.

In his first-career start on Monday, Jack Leiter was nearly perfect. He allowed only one run on a solo shot but the bats went ice cold behind him. Vanderbilt lost 1-0, forcing them to an elimination game against Stanford.

The Cardinal jumped out to a 5-2 lead through 5.5 innings but the Commodores battled back with two runs of their own in the bottom half of the sixth.

On a 3-2 pitch with two outs and one-run deficit, Javier Vaz drew a walk. Spencer Jones added a single and there were two on, two outs.

We've got runners on the corners. #VandyBoys | #CWS pic.twitter.com/SOKdBWVyBH

Enrique Bradfield Jr. tied it up.

And then the wild pitch walked it off. Pandemonium.

The Vandy Boys will get a rematch with the Wolfpack on Friday and Rocker is expected to pitch. Can the reigning champs continue to do the unthinkable? Will Rocker rediscover his stuff? No matter what happens, college baseball is the best.