Vanderbilt Fans Go Viral For The Calmest Storming Of A Field In History, Still Get Fined $250K 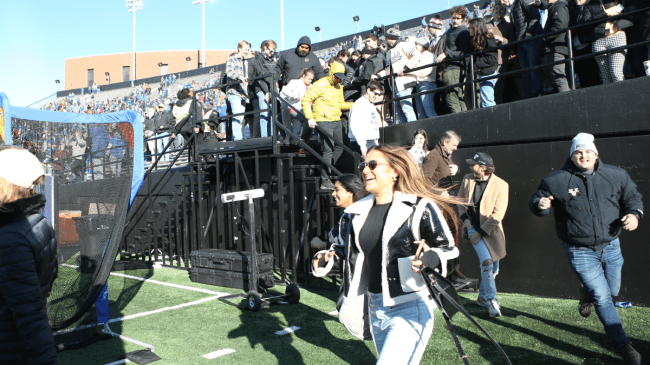 This past college football Saturday was littered with major upsets, and a few close calls. Playoff contenders Michigan and TCU escaped defeat with last second field goals. Major SEC programs like Tennessee and Florida weren’t so lucky. In both cases, fields were stormed as fans took the celebration from the stands to the sidelines to enjoy the moment with the players.

Vanderbilt was one of those fanbases leaving their seats after beating the Gators in Nashville for the first time since 1988. It was just the second win over the program in its last 32 games. They beat Florida in The Swamp back in 2013.

The victory was also significant as it started the Commodores’ first winning streak in conference play since 2018. They took down Kentucky the week prior to beating Florida. Before that win over the Wildcats, Vandy had lost 26 straight SEC games. With the back-to-back upsets, the team is now one win away from bowl eligibility.

As for the storming of the field, the Commodores did it in only a way that Vanderbilt could.

Possibly the slowest rushing of the field ever pic.twitter.com/La0nbgQxST

Fans calmly walked out onto the field in single file lines, a scene far different than what’s typically experienced in these moments. Usually, it’s a hectic environment with bodies jumping over walls, limbs flailing, and yelling and screaming heard the whole time through. In Nashville, it was quite the opposite.

Everyone stayed calm and composed as they strolled out to enjoy the win. Unfortunately, that peaceful partying didn’t land any sympathy from the SEC office.

Rushing the field is something that happens, but it’s not necessarily encouraged. Fan and player safety is at the forefront of college sports and putting the two on the field at the same time isn’t ideal. Look no further than Tennessee’s 52-49 win over Alabama earlier this season.

As Vols fans ran onto the gridiron, Alabama wideout Jermaine Burton was seen pushing a female attendee as he headed to the locker room. For that reason, the SEC will often fine teams for having fans leave their seats. The more a school breaks the rule, the harsher the penalty.

Vanderbilt’s offense is its third, and despite the fans being cautious in their celebration, the school landed a $250,000 fine from the SEC. The Commodores will gladly take that fine, and they’ll hope for one more next weekend. If Vandy can knock off a nationally ranked Tennessee team at home, we’ll be sure to see fans on the field yet again.