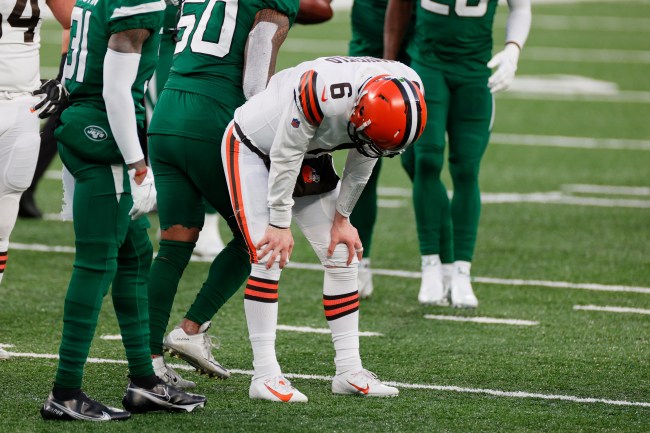 There’s never a sure bet in the NFL.

Despite the fact that the Browns were missing four of their main wide receivers due to Covid-19 protocols, Cleveland was still a big 6.5 point favorite to beat the Jets. The Browns were popular bet on Sunday as over 80 percent of the public who bet on the game put their money on Cleveland.

Although the line dropped from +9.5 to +6.5 with four Browns wideouts out, the Jets weren’t popular picks.

82% of money on Browns at @PointsBetUSA

84% of money on Browns at @WilliamHillUS

85% of money on Browns at @DKSportsbook

Unfortunately for the majority who bet on the Brown the Jets won the game by seven points.

Vegas wins again after Cleveland was the most bet team today pic.twitter.com/UfKRhM1EDn

84% of the CASH was on Baker and the Browns (-6.5) to cover vs. the Jets 😑 @WilliamHillUS pic.twitter.com/QsSHtCFkYH

Maybe fans will learn not to bet on the Browns ever again.

Never betting on the browns again 😡

me betting on the browns in 4 different parlays. pic.twitter.com/6LTejNAPTJ

I deserve to lose, betting on the Browns. #Dumbass

I bet on The Browns for the first time ever today.

On a related note, I bet on The Browns for the last time ever today.