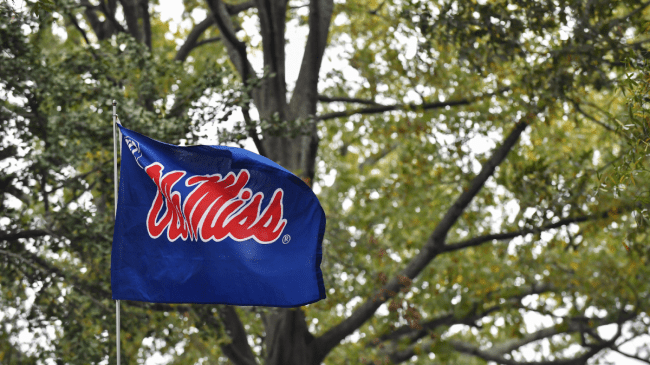 It’s been a rough couple of weeks for the Ole Miss Rebels. Following an 8-1 start, the team finds itself in the midst of a two-game losing skid.

First came a heartbreaking loss to Alabama as the Rebs fell after jumping out to an early lead. The close defeat ended Ole Miss’s chances of reaching the SEC Championship. They followed it up by getting blown out by Arkansas on Saturday, losing 42-27. OM fell behind 35-6 at halftime before making that final score look a little more respectable.

On top of the on-the-field struggles, head coach Lane Kiffin has been the focal point of an SEC coaching search on the Plains as he’s rumored to be Auburn’s top target for their current vacancy. Rumors only gained steam after the loss to the Razorbacks as many questioned whether Kiffin had already checked out this season.

The Arkansas faithful certainly let their SEC West rivals hear it in the upset, letting loose that patented “Woo Pig Souie” touchdown after touchdown. One member of the crowd eve tried to take home a souvenir, too, kicking an Ole Miss player while he was down.

Videos have surfaced on social media showing an Arkansas fan stealing the helmet of Rebel player Troy Brown. Brown, a senior linebacker, went into the stands to retrieve it to no avail.

The Hogs took everything they could from the Rebels on Saturday night, pride and equipment included. Many online were quick to respond, and as expected, Ole Miss fans weren’t happy.

One person wrote, “He should be locked up, not cool.” Another commented, “What a loser,” after seeing the clip. Even Arkansas fans couldn’t condone the action, with one supporter writing, “Embarrassing. We can’t even win right.”

While Brown was stopped from getting too far into the stands, we’ll assume the culprit was stopped before leaving the stadium and that the Ole Miss helmet was returned to its rightful owner.