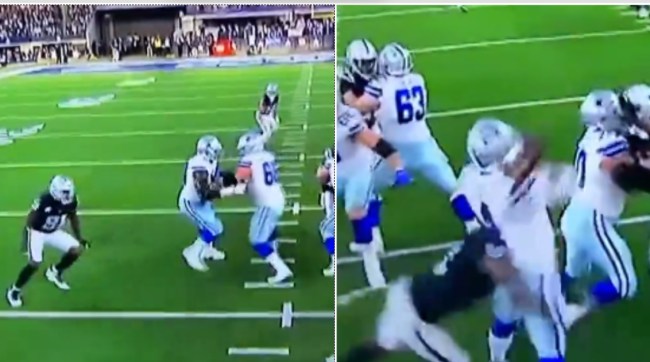 The Dallas Cowboys had a rough day against the Raiders on Thursday and coach Mike McCarthy isn’t going to be happy when he takes a look at the game film.

During the game, NFL writer Jon Marchota noticed the Cowboys made an embarrassing mistake while blocking. Watch as two Cowboys offensive linemen block each other which leads to a Raiders defender getting into the backfield untouched and getting a hit off on Dak Prescott.

Cowboys fans were confused by the offensive linemen’s play.

Can somebody explain this too me? @ShannonSharpe @RealSkipBayless @mspears96 somebody please!!!! https://t.co/tXrQqWrTcW

It’s wild when the defender is actually taken back and frozen from shock for half a second because he simply was ignored as a human footballer. 😂 https://t.co/3aRqTg2pkT

Yeah it was the REF's faults we lost that game. 🤦‍♂️ And that's our best offensive lineman we couldn't wait to get back?? @dallascowboys https://t.co/mRC5i8JIuA

Best O-Line in the league! Blocking eachother out here https://t.co/Cu1Yll9zhs