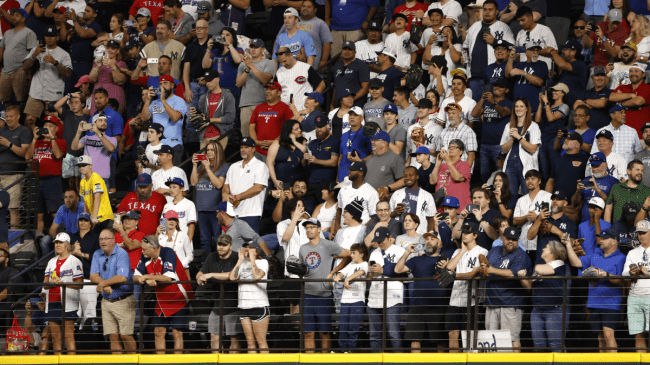 A fan is making headlines Tuesday night for leaping over a railing in an attempt to nab Aaron Judge’s 62nd HR. The fan’s unsuccessful try might cost him some serious dough in medical bills when all is said and done.

You make the call.

A FAN JUMPED OFF THE RAILINGS TO TRY AND GET THE BALL IF IT FELL ON AARON JUDGE’S 62ND HOME RUN 😂😂😂😂 #YANKEES #AARONJUDGE pic.twitter.com/0fKYuIhVNq

A number of media and MLB fans chimed in on the insane leap.

Judge has been stuck on 61 home runs for five games. He waited until the last possible moment to finally break the record as the regular season winds down.

That comes as welcomed news for Roger Maris, Jr., who’s been travelling to Yankees games ever since Judge got to 60 dingers.

And it looks like this fan was waiting for his moment to snag what’s said to be a ball valued at $2M. Unfortunately, he was nowhere near the home run, as another fan (who came prepared with a mitt) reeled in the first-inning bomb in the stands. I guess he was hoping that the ball ricocheted to the area down below.

Social media took off upon seeing the video clip of the fan jumping over the railing to grab the Aaron Judge HR.

It’s a $2M guaranteed catch for the guy who caught it on a fly. @MemoryLaneInc has offered that for this ball.

If he denies a Yankee offer, he cannot leave the ballpark with getting it authenticated. MLB makes no guarantees it will do it after pic.twitter.com/GV33dJxrn9

LMAO fan literally dropped into the bullpen trying to get to Judge’s 62nd pic.twitter.com/m5zh2m4uzD

a fan jumped over the railing trying to catch Aaron Judge’s 62nd HR that wasn’t close.

The fan on the left may not have caught Aaron Judge's HR, but he committed pic.twitter.com/fd7GuA0REx https://t.co/jRz7c7s9Fd

Have to love the commitment, but man, that’s a risk I probably wouldn’t have taken.

With the homer, Judge has officially broken the American League record for home runs in a season. The only thing this fan broke, though, was possibly a few bones.