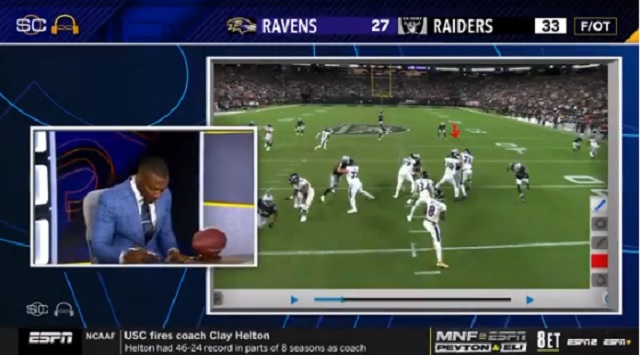 The first actively gay player in the NFL Carl Nassib made a huge play against the Ravens on Monday night but unfortunately, Ryan Clark’s commentary on his play went viral.

After the Raiders beat the Ravens in an overtime thriller on Monday night, Clark went on SportsCenter to break down the game film.

While talking about Nassib’s huge sack-fumble in OT, Clark said that the Raiders defensive end was unblocked and running “butt booty naked” in the backfield.

Tell that boy get his iphone notes apology ready https://t.co/dXsnmsOPkv

Ryan Clark gonna have to apologize on National TV tom. If he don’t do so fast we gonna see his ass apologizing on Good Morning America Friday.