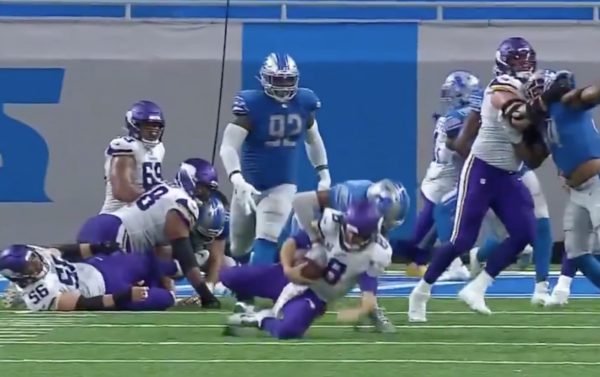 The refs in the Lions-Vikings game may have made the worst call of the season on Sunday.

On a fourth-down play near the goal-line, the Lions appeared to make a big stop after sacking QB Kirk Cousins. Unfortunately, the ref in the backfield decided to call a roughing-the-passer penalty despite the fact that it seemed like the Lions’ defender made a pretty standard tackle.

THE WORST CALL I EVER SAW GET THIS REF OFF MY TV TOTAL GARBAGE pic.twitter.com/sUgJdewXhL

This was flagged for roughing the passer. Horrendous. pic.twitter.com/c1tA7j89Ao

The Vikings were able to score a touchdown a few players later due to the penalty and the team went on to beat the Lions by two points.

Fans immediately blasted the refs for the call.

The Lions lost by two points in a game that saw a fourth and goal wiped out by the worst roughing the passer call in NFL history. Viking were awarded a first down at the 1 and scored two plays later.

Detroit Lions par for the course. See y’all in September.

I’ve seen a lot of terrible roughing the passer calls but the one on the #Lions just now may have been the worst.

Easily the worst roughing the passer penalty that truly wasn’t just happened in Detroit to erase a turnover on downs for the Lions.

Seek it out. Just dreadful.

That roughing the passer call on the Lions is definitely one of the worst of the season. That was brutally bad.

Tracy Walker’s body barely grazed Kirk Cousins (if that) and they flag him for roughing the passer. In the ref’s defense, Tracy Walker was supposed to rip off Cousins’ towel in order to get a clean sack pic.twitter.com/zjNwqrU8bv

What is the roughing the passer call there??! What an absolutely atrocious call