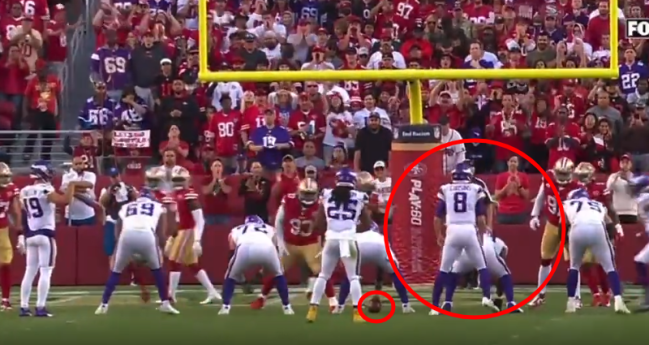 Vikings QB Kirk Cousins is one of the highest-paid QBs in the league, but he nearly made an embarrassing rookie mistake on Sunday.

A confused Cousins lined up behind his right guard instead of the center before the snap on fourth and goal during the Vikings-Niners game. Thankfully, Vikings coach Mike Zimmer noticed that his team wasn’t prepared for the snap and burned a timeout.

4th and goal. Kirk Cousins lines up under his guard. pic.twitter.com/pSLh2YFdAb

Kirk Cousins tried to take a snap from the right guard, which is not how football works. pic.twitter.com/ZCwi77ywBk

A bunch of Vikings were just lined up in the wrong spot on fourth-and-goal. Kirk Cousins had to run down the line to direct traffic, then returned to try to take the snap from the right guard. And they burned a timeout.