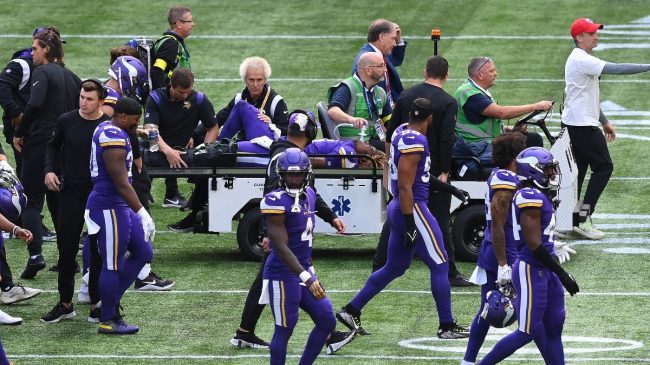 The Minnesota Vikings edged out the New Orleans Saints in a thrilling matchup overseas. However, the franchise took a hit, as rookie Lewis Cine suffered a serious injury. Now, the organization makes a surprising plan for their rookie safety.

According to Kevin Seifert, Minnesota has come to the conclusion that Cine will stay in London to undergo surgery on his fractured leg. Hopefully, the surgery goes smoothly, and the Vikings’ rookie safety makes a full recovery. At the very least, Lewis Cine won’t be left alone, as some members of the franchise will remain with him and head back to the U.S. later.

Speaking to reporters in London, Vikings coach Kevin O'Connell said that S Lewis Cine will remain in London to undergo surgery on a fractured leg. Some members of the organization will stay back with him.

Cine has shown a ton of potential to begin his early career. It’s unfortunate he’s suffered such a serious injury, as the Vikings could use his talent in the secondary. It is alarming that he must remain in the U.K. to undergo surgery. Even so, it’s likely for the best. Lewis Cine may have to remain in London for a short time before getting cleared to fly back to Minnesota.

As for the Vikings, the coaching staff must find a way to replace Cine. It’ll be hard to do, but it’s necessary for the franchise to compete in the NFC North. Keep an eye on Lewis Cine, as more information about his health status should come to light. Look for him to be out for the remainder of the season and bounce back next year.