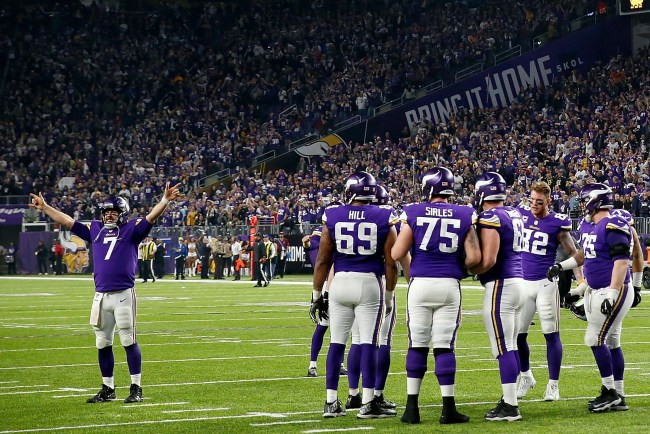 You don’t need to be from the land of 10,000 lakes to appreciate the Vikings position at the moment. Hell, you gotta tip your cap to the state of Minnesota, a state who has a team in all four major professional leagues but has the longest title drought of any major U.S. sports market–last securing a title with Kirby Puckett and the Twins back in 1991. Well, the WNBA’s Minnesota Lynx are a sneaky dynasty, winning four championships since 2011, so I don’t know what the city of Minnesota is crying about.

Oh, well maybe it’s the fact that their Vikings haven’t been to the Super Bowl in 41 years. They have a unique opportunity of being the home team in Super Bowl LII on February 4, 2018 at U.S. Bank Stadium in Minneapolis, Minnesota. They are one win away, thanks in large part to what is now being dubbed the Minneapolis Miracle.

Vikings’ QB Case Keenum hucked a last-second throw down the sideline to Stefon Diggs, who managed to take it 61 yards to the house as time expired–sending 66,612 fans at US Bank Stadium into utter chaos.

The Minnesota Vikings Twitter account put together a pretty magical recap video that will send chills up and down the spine of anyone who can appreciate the sensation of a victory of that magnitude.

Did I just become a Minnesota Vikings fan?