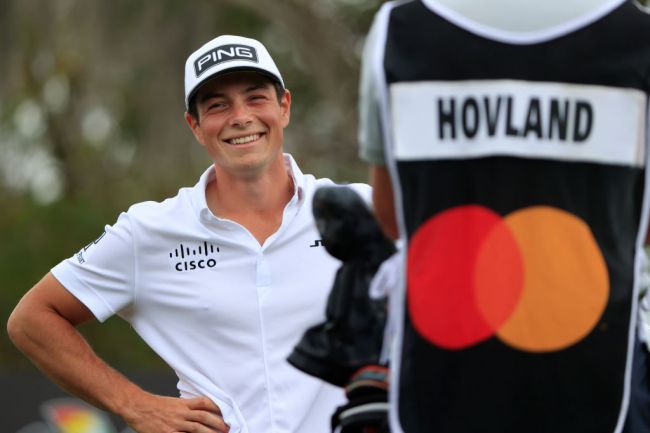 Outside of a lengthy ruling dispute on his second hole of the day on Thursday, Viktor Hovland’s opening round at The Players was relatively uneventful. He finished the day with four birdies and a double to card a two-under 70 keeping him within striking distance of day-one leader Sergio Garcia.

Or so we thought. Hovland signed his scorecard for 70 after the round, but it turned out to be the incorrect score.

Hours after he signed his card, the PGA Tour announced that he had taken a two-stroke penalty under Rule 14.7 for playing a ball from the wrong place. On the Par 4 15th, Hovland had moved his ball mark out of his playing partner’s line by two lengths of the head of his putter. Before he returned to place his ball down and attempt his putt, he forgot to move the ball mark back to its correct spot. The thing is, Hovland, his playing partners, or anyone else didn’t seem to notice it.

Well, everyone except for his own mother, apparently.

According to the broadcast on Friday, Hovland was heading to his car after his round on Thursday and his mom called to ask him if he was going to be penalized for what he did on the 15th hole. Hovland didn’t have a clue what she was referring to, but his mom quickly filled him in that he forgot to move his mark back.

After Hovland got off the phone with his mom, he and his caddie got in touch with the Rules Committee, which reviewed the tape. It confirmed that he struck his putt from the wrong place. Hovland moved his ball mark the length of one putter head away. When he went to replace it, he mistakenly moved it one putter head in the same direction instead of back to its original spot, according to the PGA Tour.

The Tour sent him a video clip of the incident and Hovland was comfortable with the ruling. He originally signed for a par on the hole, but that was changed to a double bogey.

Good on Team Hovland here. His mom may have been the only person on the planet that noticed Hovland not move his ball back correctly, they could’ve kept this little secret between them and nobody would’ve known, but they did the right thing.