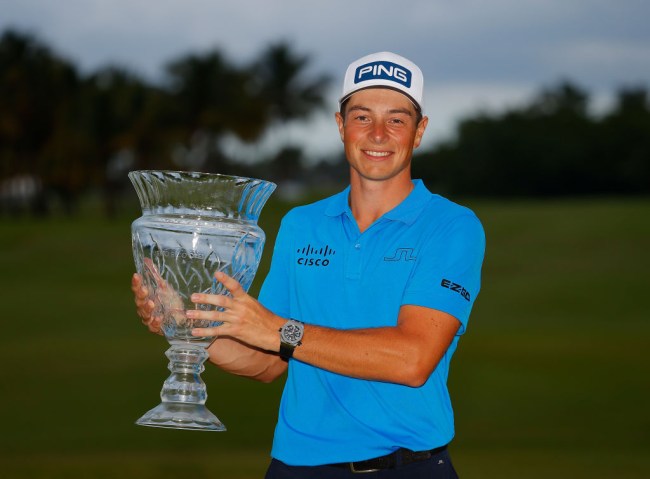 Everyone knows about the Madden curse, or maybe we should say knew about the Madden curse after Patrick Mahomes graced the cover this year and went on to win the Super Bowl, but there’s a curse in the golf world that perhaps not too many casual fans know about involving the winner of the Puerto Rico Open.

Viktor Hovland drained a lengthy birdie putt on the 72nd hole on Sunday to earn what was his first PGA Tour victory, but he now joins a cursed list of past winners.

What a way to capture your first win …

The Puerto Rico Open has only been around for 11 years, but no winner of the event has ever gone on to win any other event on the PGA Tour. The only past winner to win again was Michael Bradley, who won the event in 2009, but he didn’t necessarily break the curse because his next and only other win came at the Puerto Rico Open again two years later.

If there was ever a specific winner of the event in the past that’s really taken on the curse it’s Tony Finau.

Finau won the event in 2016, but that’s his lone PGA Tour win. He is the No. 15 player in the world at the moment, but the story surrounding Finau for his entire career dating back to that 2016 win was this is a player that’s going to pick up plenty of wins on Tour, but that simply hasn’t happened. He may have six runner-up finishes to his name, but it’s still shocking he’s found the winners circle just one time in his career given his talent.

Hovland is just 22-years-old and only earned his PGA Tour card a few months ago and while the sky is the limit for the Norwegian, he’s going to have to get the cursed monkey off of his back.

If there was one player among past winners to go on and win again on Tour, I’d put my money on Hovland to do so, but I also would have put my money on Finau to have at least three or four wins under his belt at this point as well.