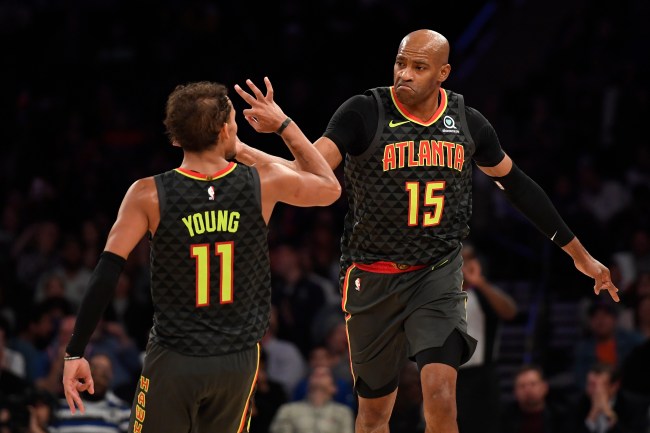 Vince Carter’s gotta be on that TB12 diet consisting of flax seed, avocado ice cream, and blood of draft busts. That is the only explanation of how, at 42 years old and entering a record setting 22nd season in the NBA, the 10-time All Star is still embarrassing fools.

Last night at Madison Square Garden was no different.

Vinsanity drilled four 3-pointers in the final five minutes of the second quarter and finished the half with 14 points of the Hawk’s final 16 points of the quarter.

VINCE CARTER TURNING BACK THE CLOCK

Aside from being a fossil, Carter going off from three should be of no surprise to NBA fans. As ESPN points out, Carter has made more three pointers in his two-decade career than the entire Hawks roster COMBINED. After the new year, Carter will be the first in NBA history to play in four different decades.

Half-Man, Half-Amazing finished with 17 points in the Hawks 100-96 preseason win over the Knicks.

After the game, Knicks coach David Fizdale could only joke about Carter’s productivity.

“Will he just retire already? I’m so tired of him.” Fizdale joked. “I think it’s phenomenal. It’s awesome to see. He gives us 40-somethings a lot of hope.”

NBA Twitter took some time out from trolling to honor a legend.

Vince Carter was drafted 22 years ago.

I feel like my childhood will be officially over when Vince Carter retires. pic.twitter.com/pZWKyYkm7W

I don’t want Vince Carter to ever retire! Like EVER!!!

Preseason or not: Inject Vince Carter content straight into my veins.