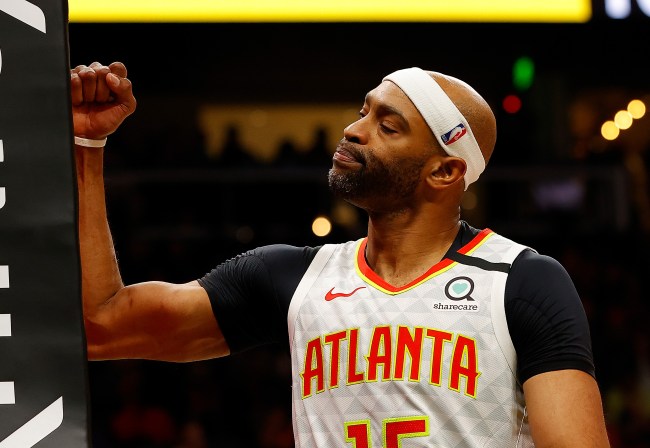 At this point, each one of our lives have been touched by the coronavirus in a very real way. Maybe your work shut down offices, or your upcoming vacation is in limbo, or you’re trying to figure out an event to get drunk to mid-week if March Madness is canceled.

For NBA fans, one of these This Shit Is Real moments came last night upon realizing that one of the game’s greatest players for 20+ years will likely be forced into an unceremonious retirement.

Vince Carter deserved more than this.

Vinsanity’s final game of his 22-year career likely occurred in a 136-131 loss to the Knicks, a justified farewell tour cut short by an insidious virus.

Still, in the final moments of Wednesday’s game, the 43-year-old found a way to make an ultimately meaningless game memorable.

in what could possibly be Vince Carter’s final moment as an NBA player, he enters game in final seconds and drills 3. pic.twitter.com/g2qiIZMkhb

After the game, Vince Carter grew emotional over the possibility of playing the final game of his career, so I did too.

Such a weird night but I am truly thankful for each and every person during this 22yr journey.
If this is really it, I thank everyone for your love and support for all these years.
B E Z✌🏽

Can’t imagine the feeling of showing up to the arena having no idea you’re playing your final NBA game. Two decades of being the most beloved figure in the NBA cumulates in a mid-March loss to the Knicks. Vince deserved better, and the NBA world acknowledges this.

appreciate you OG .. much love 🙌🏽🙏🏽💪🏽 pic.twitter.com/p4bhYttmRd

In the midst of everything. LETS CELEBRATE VINCE CARTER!!!! We don’t know what the future holds buts let’s give him his flowers and applause tonight!!!! Well done champ🌹🌹🌹

VC! 19-year-old me will never forget the impact you had on my career bro 🙌🏿🙏🏿 pic.twitter.com/4ukFggdrQu