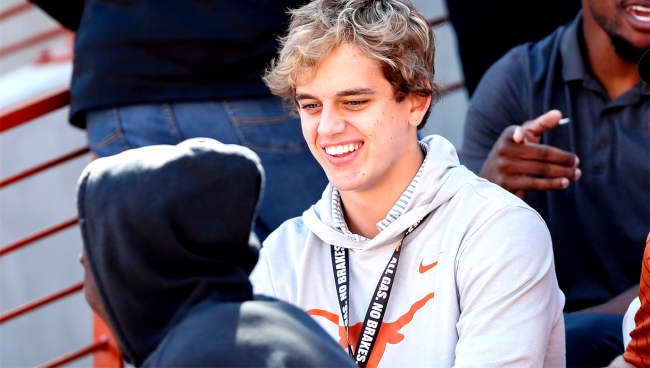 Vince Young is without a doubt a Texas Longhorns football legend. He locked up that honor with his incredible performance, winning the BCS National Championship against the defending champions USC in the 2006 Rose Bowl.

So it’s certainly understandable that Young’s opinion of the Texas football program might be a little, how shall I put this, skewed.

However, even that doesn’t explain what he said on Thursday on First Take when talking about future University of Texas quarterback Arch Manning.

“How much pressure is on this young man to live up to the last name on top of the rich history of the quarterback position at U.T.?” Keyshawn Johnson asked Young.

Quick aside… who is Key talking about when he says “the rich history of the quarterback position at U.T.” other than Vince Young? Chris Simms? Major Applewhite? Colt McCoy? Bobby Layne? Sorry… moving on.

“I mean Arch Manning he’s in a family that’s going to teach him the best way and how it works and feel like that’s not going to be an issue at all,” Young replied.

“When you’re playing at the University of Texas, you’re pretty much an NFL quarterback already so you’re going to need to have that pressure and competition in the quarterback room.”

Sorry. Again, what?! Does he mean Shane Buechele? Sam Ehlinger? I’m so confused.

Apparently I am not the only one confused by Vince Young and Keyshawn Johnson’s statements about University of Texas quarterbacks.

Is this why guys don't get drafted from Texas anymore? Because they are technically already in the NFL?

Vince was an incredibly gifted athlete. His 6 on the wonderlic test shows those gifts stop at his shoulders.