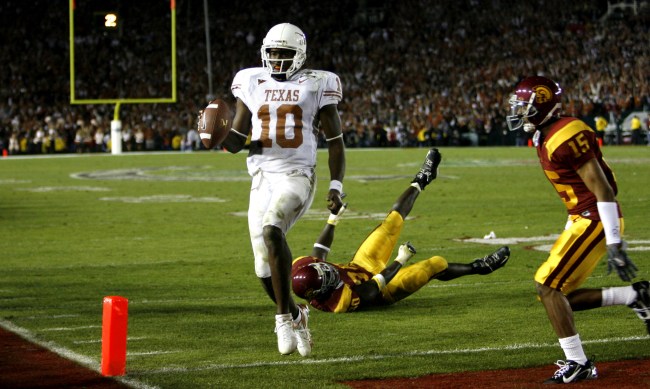 No doubt about it, Vince Young was one of the greatest college football players of all time.

As a junior, Young won the Davey O’Brien Award, the Maxwell Award, the Manning Award, and finished second to Reggie Bush in Heisman Trophy race. (Did he get the trophy Bush had to give back?)

Young’s jersey was retired by the University of Texas in 2008 after going 30–2 as a starter and almost single-handedly winning one of the most exciting BCS National Championship games of all time versus USC in the 2006 Rose Bowl.

He was Lamar Jackson before Lamar Jackson in 2005 becoming the first Division I football player to ever throw for 3,000 yards and rush for 1,000 yards in the same season.

Now 36, and well-removed from his playing days, Young is back in the news for his awards. Only this time, it’s not for any accolades. It’s because a woman who paid a few thousand dollars for a semi-blind auction of a storage space back in November hit the jackpot when she discovered the storage unit was filled with a bunch of Vince Young’s awards and trophies from his college football days.

According to the winning bidder who spoke to TMZ Sports, she is now in possession of Young’s Maxwell Award, his 2006 Rose Bowl MVP trophy, his Manning Award, the ball from his first-ever NFL touchdown pass, as well as numerous game-worn helmets from throughout his career including the one he wore in the historic 2006 Rose Bowl.

Now, anyone that’s interested in such memorabilia can place a bid for it on eBay as the woman has so far put Young’s Maxwell Award, Rose Bowl MVP trophy, and Manning Award up for sale – for $50,000 each.

She also told TMZ Sports that she hasn’t been able to reach Young to see if he wants to buy his stuff back, but would be willing to sell it all back to him if he is interested.