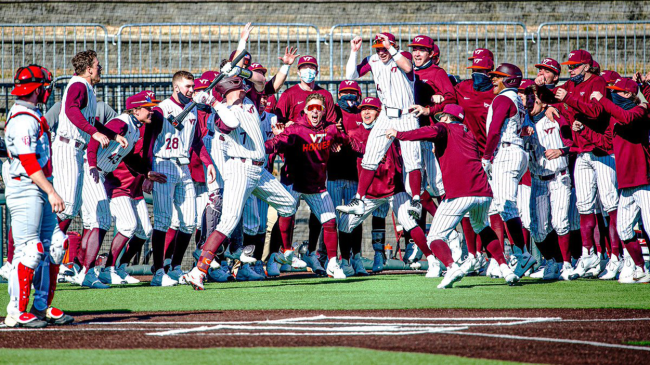 Over the past few years, we have seen a growing amount of props being used across college football. From turnover chains, to backpacks, to thrones and swords, they have taken on a life of their own.

College baseball is starting to do the same and it’s awesome. Last year, we saw the rise of home run props across the sport and one in particular captured the attention of baseball fans across the world— Virginia Tech’s Home Run Hammer.

The concept is simple:

When a Hokie batter mashes a tater, he rounds the bases and heads over toward the Tech dugout where he is tossed a sledgehammer. Once the sledgehammer is passed to the dinger-hitting batter, he proceeds to swing it over his head and slam it into the turf while his team shouts “boom” and jumps into the air as if the ripple effect from the hammer swing sent them skyrocketing into the air.

It is absolutely ELECTRIC.

The 2022 college baseball season began on Friday. Virginia Tech hosted UNC Asheville in Blacksburg and the hammer made its 2022 debut early and often.

During the bottom of the second inning, freshman Carson DeMartini stepped into the box for his first at-bat on the collegiate level. He proceeded to go yard on the very first pitch he saw and out came the hammer.

Not but a few moments later, UPenn transfer Eduardo Malinowski got in on the hammer action to put the Hokies up 7-0 through two innings.

One inning later, Cade Hunter hit a solo shot and the Home Run Hammer made its third appearance in the first three innings of the season.

The home run trend continued in the fourth inning and Tanner Schobel went all the way around the bases. He then was met with the hammer.

College baseball is back and so is the most exhilarating prop in all of college sports. With the MLB in the middle of a serious, lengthy lockout, it’s time for the NCAA level to get some shine and the sledgehammer is the perfect way to grow the game.