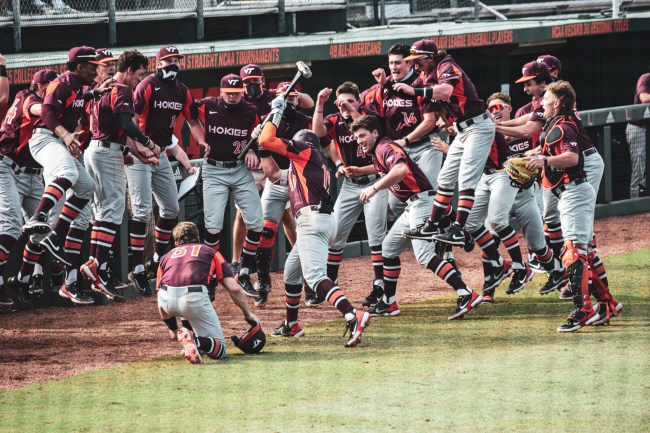 Chains, planks, backpacks and thrones. We have seen quite a few props in college football over the past few years, but the trend has made its way to the baseball diamond and we are the better for it.

Virginia Tech’s ‘Home Run Hammer’ is the most electric thing ever 🔨pic.twitter.com/NpRFxfRRTE

Mind you, I might be bias because of the religious experience that is Ole Miss’ right field, but watch this video and tell me you disagree. That’s a lot of cheap, domestic beer being thrown into the air to celebrate a dinger. It happens every time a ball goes over the wall.

Anyway, the personality of the collegiate game is what makes it incredible and the props are taking it to a new level of fun. Alabama was first to get involved with a home run chain, much like Miami’s turnover chain that started it all.

Alabama Baseball has a 'home run chain' and it is absolutely amazing ⛓ pic.twitter.com/oLblIA8BWc

During Virginia Tech’s third game of the year, the Hokies introduced their ‘Home Run Hammer’ during a 22-2 route of Radford. The concept is simple: hit a home run, round the bases and meet the ENTIRE team after crossing the plate. A couple of guys usually leave the dugout to celebrate a tater, but not everybody. The Hokies clear it out and step it up a notch— tossing a sledgehammer to the player who went yard for him to slam into the ground.

Here’s a good look at the toss.

They even bring it on the road.

How about a Home Run Hammer after bat-flipping to the moon?

That bat flip though 👀

To make things even better, Virginia Tech is legit. The Hokies are 7-2 with a road series win over No. 6 Miami and a home series win over No. 25 North Carolina. I hope this team makes it to the College World Series so we can see the Home Run Hammer in Omaha.