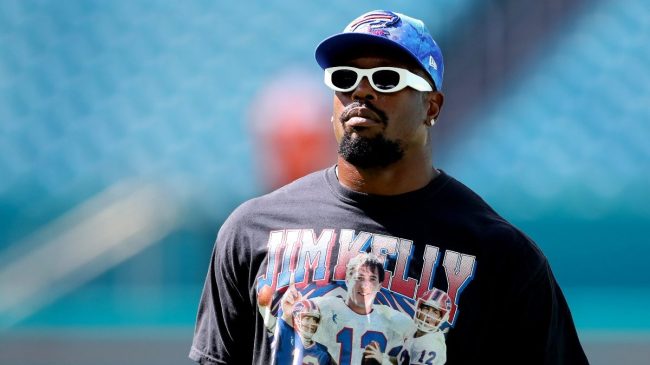 The Pittsburgh Steelers are set to take on the Buffalo Bills in Week 5. It should be an interesting matchup, as Pittsburgh has handed the reigns to Kenny Pickett. Even so, his life is not going to be easy, as Von Miller will surely give the rookie quarterback a welcoming party. However, head coach Mike Tomlin likely isn’t making things any easier by hyping up Miller.

Von Miller Might Just Be In The Steelers Nightmares Already

According to Sports Illustrated, the Steelers head coach had nothing but praise for the Bills’ superstar linebacker. It makes sense considering Von Miller has been a beast throughout his entire career. Tomlin goes as far as to say that Miller, “is an alien visiting from another planet.” Mike Tomlin’s full statement is also provided by Sports Illustrated.

“He’s Von Miller. Some guys are just aliens visiting from another planet, and that’s just the reality of it. Man, in the National Football League, you’ve got to respect all these guys—they’re all freaky. But some guys are even freaky in our setting. And he’s just one of those guys. He always has been since he came out of [Texas] A&M, moving, changing, and running like a corner. He needs no endorsement from me. Kudos to Von Miller. We talk about his talents often, but this guy’s a scientist. He works at his craft. He encourages others to do that like him.”

It might be a long day for Kenny Pickett and the Steelers. Pittsburgh arguably has the worst offensive line in the NFL and they’ll have a rookie quarterback under center. Meanwhile, the Bills are still a Super Bowl favorite and Von Miller is playing at his best so far this season.

We’ll see how it plays out, but there’s a reason Mike Tomlin is speaking of the Bills’ superstar so highly.