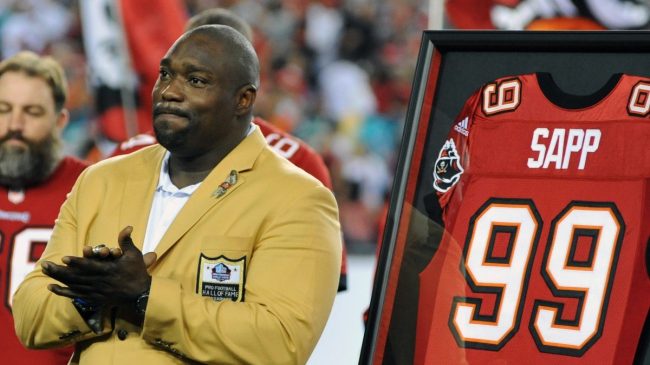 The NFL’s ongoing concussion issue doesn’t seem to have a light at the end of the tunnel. Especially considering multiple retired athletes continue to claim they’re suffering from CTE. Now, Tampa Bay Buccaneers Hall of Fame defensive tackle, Warren Sapp, shares his struggles with the CTE as well.

During a phone interview with Rick Stroud, Sapp opens up about his struggles after football. Especially now since he’s 49 years old. According to Stroud, the former Buccaneers superstar tells a story just a couple of years ago that feared him the most.

“Sapp was never more scared than when he was making a routine drive down sun-kissed Biscayne Boulevard a couple of years ago. He planned to visit a friend of 25 years at his Miami office, a drive he had made dozens of times. No matter how hard he tried, Sapp couldn’t remember where his friend’s office was. When he called someone else to help with directions, the person thought he was joking.”

Warren Sapp continues by stating, “I wish you could’ve been there and looked into my eyes because it was the scariest thing. “I can rip and run on every road in this city and do whatever I want to do. I’m telling you, it was the scariest moment of my life. Scared me so much, I turned around and went home. I turned that car around, got home on my couch, turned the TV on, and just sat there. I didn’t know what that was, but I didn’t feel good.”

That’s a wild story to hear, especially considering how familiar Sapp is with the area. All those hits to the head fighting in the trenches during his time with the Buccaneers could very well have given him CTE. Now, Warren Sapp takes his time and writes everything down when he can, per Rick Stroud. “Now I fill up my phone with notes and say it out loud. You’ve got to. You’ve got to prepare yourself for the possibility you’re going to forget.”

Maybe one day the NFL can solve its concussion issue. Just this season alone we’ve seen multiple hits to the head that look incredibly scary. Until then, this is a massive risk players take when they play in the league. Hopefully, the Buccaneers’ Hall of Fame defensive tackle can live his best life while potentially suffering from CTE.